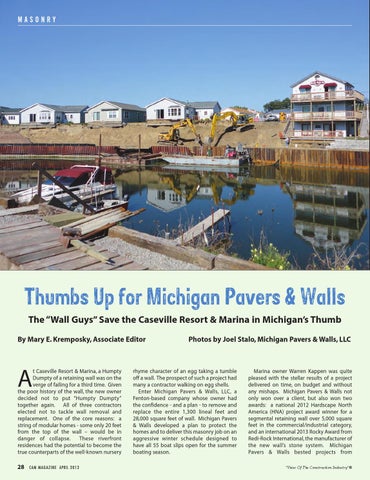 t Caseville Resort &amp; Marina, a Humpty Dumpty of a retaining wall was on the verge of failing for a third time. Given the poor history of the wall, the new owner decided not to put “Humpty Dumpty” together again. All of three contractors elected not to tackle wall removal and replacement. One of the core reasons: a string of modular homes - some only 20 feet from the top of the wall – would be in danger of collapse. These riverfront residences had the potential to become the true counterparts of the well-known nursery

rhyme character of an egg taking a tumble off a wall. The prospect of such a project had many a contractor walking on egg shells. Enter Michigan Pavers &amp; Walls, LLC, a Fenton-based company whose owner had the confidence - and a plan - to remove and replace the entire 1,300 lineal feet and 28,000 square feet of wall. Michigan Pavers &amp; Walls developed a plan to protect the homes and to deliver this masonry job on an aggressive winter schedule designed to have all 55 boat slips open for the summer boating season.

Marina owner Warren Kappen was quite pleased with the stellar results of a project delivered on time, on budget and without any mishaps. Michigan Pavers &amp; Walls not only won over a client, but also won two awards: a national 2012 Hardscape North America (HNA) project award winner for a segmental retaining wall over 5,000 square feet in the commercial/industrial category, and an international 2013 Rocky Award from Redi-Rock International, the manufacturer of the new wall’s stone system. Michigan Pavers &amp; Walls bested projects from “Voice Of The Construction Industry”® 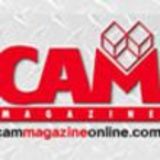