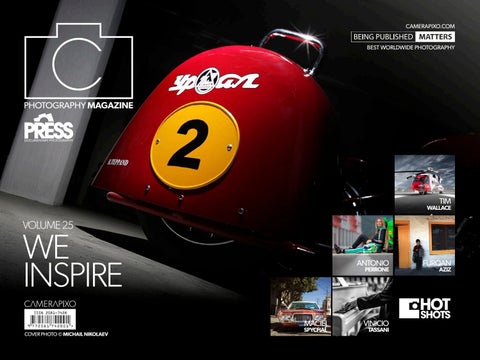 NEW ILLUSIONARY WORLD AROUND THE VEHICLE Automobile photography is a uniting factor for everything Michail has done in his life - he studied general machinery, later automotive systems and production at the university, used to work in car dealerships, in automotive industry in testing, engineering and manufacturing, - everything in Michail's life had a relation to automobiles and these have always been with him. Oldtimers, motorsports, brand new cars, concepts, trucks Michail has always been interested in any cars and basically everything that had wheels and could drive. Therefore photography is only means that can help reflect and show the most exciting parts - best angles, peculiarities of every single item, post production in turn helps to intensify the effect, and on some occasions - create new illusionary world around the vehicle and to create somebody's dream that will definitely come true.

CAMERAPIXO magazine is recognized around the world as one of the largest independent online photography magazines. Thanks to the variety of itâ&#x20AC;&#x2122;s publications and a diverse network of other journalists and media professionals makes it easy to start working as an independent contributor.

Camerapixo Press Card gives me confidence in crisis situations, such as demonstrations and riots, where I often have to deal with the police and a hostile crowd of people. Knowing that I'm not an anonymous photographer but member of the Camerapixo gives me motivation to work better and with continuous improvement. It is also a commitment to follow the photojournalist Code of Ethics. And this way, thanks to Camerapixo Press Card I began to act like a pro, and I am also treated this way, while remaining independent photojournalist. This Press Card is a proven tool. The perfect complement is also the ability to publish the photoreportage in Camerapixo photography magazine as well as on their website.

GIOVANNI DALLAPICCOLA © 64 “IN THE DUST”

© GRZEGORZ WÓJCIK “RIDER ON THE STORM”

Haldi Festival celebrated at the Pattan Kodoli village in Kolhapur district of Maharashtra, attended by thousands of devotees who come down from Andhra Pradesh, Karnataka and Maharashtra. The festival is celebrated in the Vaishakh month of the Hindu calendar to offer prayers to Shri Vitthal Birdev, the principal deity of the shepherd community. It is believed to bring in good fortune to the community. After accepting the invitation, Shri Faradebaba playing Hedam dance (blowing with a sword on the stomach) and devotees came to the temple. During the festival thousands of devotees gather in an open area in front of the banyan tree to watch the rituals. Throughout the day you can see many people gather in small groups and sing bhajans and folk songs. The devotees also shower bhandara on everything they like or worship. During the peak of the procession your will be mesmerized and lost in the moment. In the blink of an eye everything turns to yellow.

LOST IN THE MOMENT SHRIDEEP NANAL

My emphasis is to present the genuine aspect of this stunning place who rely on education affection and morality. Education is supreme imperative influence on human life it's a key to accomplishment. Neelum Valley is becoming protagonist model for those who have faith in education, will lead them to successful life. Specifically the cultured people of area are playing role to deliver education without concerned about fewer facilities. As perceive children of valley are certainly anxious about education they believe that education can help to accomplish their visions. They have many political and socio-economical hurdles but they focus to grow with education. The literacy rate is increasing day by day in Neelum Valley children innocent faces constantly show their assurance with education. They cross miles to acquire education for schools although schools are not in good circumstances, but their trust is strong that this is the first key to success.

HAVE FAITH IN EDUCATION FURQAN AZIZ

Why blue? The blue in Sri Lanka is the color of the azure, the sky, the oceans, the rivers. This color represents divine wisdom, truth, courage, the ability to fight evil and pure feelings. Some deities are represented in popular imagery with blue skin ...

Why the elephant? The elephant is also a sacred animal in Sri Lanka ( what is not there), Ganesh is an elephant too But it also represents a problem and a danger... the population encroaching on its territory. The photos were taken from an orphanage in central Sri Lanka where orphan elephants are collected after poaching or accident. Finally, the process... All prints are cyanotypes. The cyanotype is an old negative monochrome photographic process, through which we obtain a photographic blue print of Prussia, cyan blue. This technique was developed in 1842. In my eyes this process is in harmony with this wonderful country that is Sri Lanka.