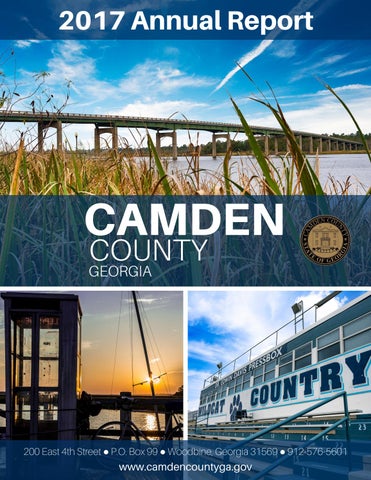 Chuck Clark, District 2, Vice-Chair Commissioner Clark began his first term on the Board of Commissioners in January 2011. He also serves on the Public Service Authority (PSA) Board. His term expires in December 2018.

Jimmy Starline, District 3, Chair Commissioner Starline began his first term on the Board of Commissioners in August 2010. He also serves on the Camden Criminal Justice Council. His term expires in December 2020.

Gary Blount, District 4 Commissioner Blount began his first term on the Board of Commissioners in January 2011. He also serves on the Camden County Board of Health. His term expires in December 2018.

Ben L. Casey, District 5 Commissioner Casey began his term on the Board of Commissioners in January 2017. He also serves on the St. Marys River Management Committee. His term expires in December 2020.

About the Board of Commissioners

The Board of County Commissioners (BOCC) serve as ambassadors and liaisons to many local, regional, and state boards, as well as committees that cover a variety of important matters affecting Camden County residents and businesses. Topics covered by these boards include the economy, transportation, regional and local planning, environment, tourism, juvenile issues, and the arts. Members of the BOCC are actively engaged in working for the good of the community.

County Administrator I am eager to share with our citizens the milestones and progress Camden County achieved during a very busy 2017. The purpose of this annual report is to update our residents and visitors concerning the work and efforts made throughout the county that are set forth by our Strategic Plan 2017 â&#x20AC;&#x201C; 2022 â&#x20AC;&#x201C; 2032. Our Action Agenda 2017 component of the Strategic Plan, approved by the Board of County Commissioners, brought us new accomplishments and awards that I will share with you in the report. The entire Strategic Plan 2017- 2022- 2032 can be found on the county's website at www.camdencountyga.gov. We use a strategic plan model that includes guiding essentials, such as value-based principles that detail a one-year work program focusing on a policy agenda for the Board of Commissioners, Annual Action Plan, Management Agenda for Staff, and other major projects; strategic goals that focus on outcome-based objectives and potential actions for the next 5 years; and a look 15 years in the future. The 2017-2022-2032 Strategic Plan served as a guide for our work this year. In November, we were fortunate to have Shawn Boatright join Camden County as Deputy County Administrator. Shawn's talent and skills are a benefit to the county and he is helping us meet the Commission's goal of succession planning as we move Camden forward. This report highlights the tireless work of our Camden County employees and the benefits residents have seen because of their dedicated service. These talented public servants work hard every day to make our county great. I hope you enjoy this annual report and I look forward to working with you in 2018. Yours for a Better Camden,

Camden County's mission is to deliver defined county services with exceptional customer service and in a financially sustainable and transparent manner.

Fiscal Responsibility Where does the money go? Housing & Development 2.3%

Public Works 29.6% *Governmental Services only. Does not include Enterprise Funds.

In 2017, Animal Control answered over 3,600 calls for service in Kingsland, St. Marys, Woodbine, and all across unincorporated Camden County.

1,030 people became CPR certified through one of the 224 CPR classes taught through Camden County Fire Rescue.

The Georgia Air National Guard aided the Emergency Management Agency (EMA) with a Point of Distribution, supporting Camden County residents with over 140,000 bottles of water, more than 1,500 tarps, and 44,100 pounds of ice during Hurricane Irma recovery.

Award-Winning Government The National Association of Counties (NACo) recognized Camden County with four Achievement Awards, including one Best in Category Award. The Achievement Awards are for: Advanced Connectivity and Transparent Government-'Staying Connected to Residents' Board of County Commissioners Living Well Onsite Wellness Clinic-'Customized Technology for Patients with the use of Electronic Medical Records' Doing Business Online-'Efficient and Convenient Electronic Bill Payment Service' The Best in Category Winner is for the Brush Truck and Tanker Retrofit Program through a Public-Public Partnership. This concept was recognized as the best idea in the Risk and Emergency Management category and was one of only eighteen (18) Best in Category winners. Additionally, this list was highlighted as one of the 100 Brilliant Ideas at Work by NACo. The Government Finance Officers Association (GFOA) presented two awards to Camden County’s Finance and Budget Department during 2017. The Department was awarded the FY2016 Certificate of Achievement for Excellence in Financing Reporting (CAFR) for going beyond the minimum requirements of generally accepted accounting principles in preparing comprehensive annual financials showing full disclosure and transparency. This is the sixteenth consecutive year the County has received this award.

Secondly, the County’s Finance and Budget Department received the FY2017 Distinguished Budget Presentation Award for the highest quality in budget reporting that reflects both the guidelines established by the National Advisory Council on State and Local Budgeting, and the GFOA’s best practices on budgeting. This was the second consecutive year that Camden County submitted their budget for review and received the award.

Your Government at Work The Camden County Library had nearly 141,000 visitors in 2017.

The Georgia Department of Natural Resources Environmental Protection Division (EPD) awarded Camden County a $204,375 grant to clean up a section of the St. Marys River in the Horsepen Creek Watershed.

The PSA's Off Our Rockers Senior Fitness Program attendance increased by over 30%. Additionally, new group fitness classes were added and the Summer Camp program was expanded.

Ways to Keep in Touch

FEBRUARY- The Board of Commissioners adopted the 2017 Action Agenda for the County's Strategic Plan and released the 2016 Annual Report. FEBRUARY- Southeastern Trust for Parks and Land (STPAL) donated 296.23 acres to Camden County for the creation of a passive park in Kingsland. MARCH- Land clearing began on the Kingsland Bypass Phase I project, widening Colerain Road. Phase I should be completed in 2019. APRIL- Camden County improves to a Class 6 in the National Flood Insurance Program (NFIP) Community Rating System (CRS), estimated to save residents of unincorporated Camden County $145,845 annually. MAY- The National Association of Counties (NACo) awarded Camden County a Best in Category Award and three National Achievement Awards.

Camden County 2032 is the premier coastal community of Georgia - Beautiful and Safe.

Camden County 2032 has relaxed living with quality residential developments and abundant leisure choices for all.