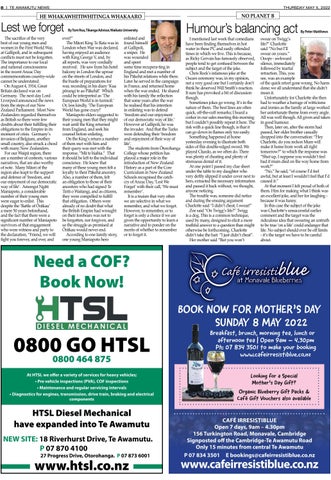 Lest we forget The sacrifice of the very best of our young men and women in the First World War, at Gallipoli, and in subsequent conflicts must not be forgotten. The importance to our local and national consciousness in the recent Anzac Day commemorations country-wide cannot be understated. On August 4, 1914, Great Britain declared war on Germany. The next day Lord Liverpool announced the news from the steps of our New Zealand Parliament. Most New Zealanders regarded themselves as British so there were few doubts about their fulfilling their obligations to the Empire in its moment of crisis. Germany’s invasion of Belgium, another small country, also struck a chord with many New Zealanders. For our Waipā region, there are a number of contexts, various narratives, that are also worthy of note. Many Māori of the region also leapt to the support and defence of ‘freedom, and our enjoyment of our democratic way of life’. Amongst Ngāti Maniapoto, a considerable number of their young men were eager to enlist. This despite the ‘Battle of Ōrākau’ a mere 50 years beforehand, and the fact that there were a significant number of Maniapoto survivors of that engagement who were witness and party to the declaration, “Friend, we will fight you forever, and ever, and

ever!” The Māori King Te Rata was in London when War was declared, having enjoyed an audience with King George V, and, by all reports, was very cordially received. He saw from his hotel balcony in London the uproar on the streets of London, and the bustle of preparations for war, recording in his diary ‘Kua pōrangi te ao Pākehā!’ Which could be interpreted as ‘The European World is in turmoil.’ Or, less kindly, ‘The European World has gone crazy!’ Maniapoto elders suggested to their young men that they might wait until the King returned from England, and seek his counsel before enlisting. On the King’s return a number of them met with him and their query was met with the response, “Mā te hiahia.” That it should be left to the individual conscience. He knew that many of these young men felt a loyalty to their Pākehā ancestry. Also, a number of them, felt an obligation to those of their ancestors who had signed Te Tiriti o Waitangi, and as citizens, they were compelled to fulfill that obligation. Others were already of no doubt that what the British Empire had wrought on their forebears was not to be forgotten, nor forgiven, and so the struggle as promised at Ōrākau would never end. According to one family story, one young Maniapoto hero

enlisted and found himself at Gallipoli, a sniper. He was wounded and spent some time recupera-ting in England and met a number of his Pākehā relations while there. Later he served in the campaign in France, and returned home when the war ended. He shared with his family the reflection that some years after the war he realised that his intention in enlisting was to defend ‘freedom and our enjoyment of our democratic way of life.’ However at Gallipoli, he was the invader. And that the Turks were defending their ‘freedom and enjoyment of their way of life’. The students from Ōtorohanga College whose petition has played a major role in the introduction of New Zealand History as a part of the Core Curriculum in New Zealand Schools recognised the catchcry of Anzac Day, ‘Lest We Forget’ with their call, ‘We must remember’. It is a truism that very often we are selective in what we remember, and what we forget. However, to remember, or to forget is only a choice if we are given the opportunity to learn a narrative and to ponder on the merits of whether to remember or to forget it.

I mentioned last week that comedians have been finding themselves in hot water in these PC and easily offended times in which we live. This is because, as Ricky Gervais has famously observed, people tend to get confused between the subject and the target of the joke. Chris Rock’s infamous joke at the Oscars ceremony was, in my opinion, not a very good one but I certainly don’t think he deserved Will Smith’s reaction. It sure has provoked a bit of discussion though. Sometimes jokes go wrong. It’s in the nature of them. The best lines are often quick, off-the-cuff remarks; I heard a corker in our sales meeting this morning but I couldn’t possibly repeat it here. The risk with a quick line though, is that it can go down in flames only too easily. Something happened at home yesterday evening to illustrate both sides of this double-edged sword. We played Cluedo, as we often do. There was plenty of cheating and plenty of strenuous denial of it. At one point I passed my clue sheet under the table to my daughter who very deftly slipped it under cover next to hers, extracted the necessary information and passed it back without, we thought, anyone noticing. The trouble was, someone did notice and during the ensuing argument Charlotte said “I didn’t cheat, I swear!” Zoe said “On Twigg’s life?” Twigg is a dog. This is a common technique, used by many, designed to elicit a more truthful answer to a question than might otherwise be forthcoming. Charlotte didn’t take the bait. “I just didn’t cheat”. Her mother said “But you won’t

swear on Twigg’s life?” Charlotte said “No but I’ll swear on yours.” Ooops - awkward silence, immediately followed by tearful retraction. This, you see, was an example of the quick retort gone wrong. No harm done; we all understand that she didn’t mean it. Unfortunately for Charlotte she then had to weather a barrage of witticisms and ironies as the family at large worked her unfortunate theme from every angle. All was well though. All given and taken in good humour. Then, later on, after the storm had passed, her older brother casually dropped into the conversation: “Hey Charlotte, do you reckon Mum will make it home from work all right tomorrow?” to which the response was “Shut up, I suppose you wouldn’t feel bad if mum died on the way home from work?” “No,” he said, “of course I’d feel awful, but at least I wouldn’t feel that I’d caused it.” At that moment I felt proud of both of them. Him for making what I think was an excellent joke, and her for laughing because it was funny. In this case the subject of the joke was Charlotte’s unsuccessful earlier comment and the target was the ridiculous idea that swearing an untruth to be true ‘on a life’ could endanger that life. No subject should ever be off limits - it’s the target we have to be careful about. 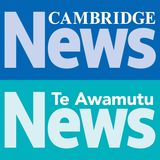