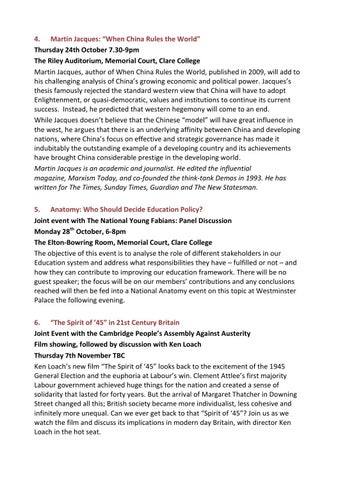 4. Martin Jacques: “When China Rules the World” Thursday 24th October 7.30-9pm The Riley Auditorium, Memorial Court, Clare College Martin Jacques, author of When China Rules the World, published in 2009, will add to his challenging analysis of China’s growing economic and political power. Jacques’s thesis famously rejected the standard western view that China will have to adopt Enlightenment, or quasi-democratic, values and institutions to continue its current success. Instead, he predicted that western hegemony will come to an end. While Jacques doesn’t believe that the Chinese “model” will have great influence in the west, he argues that there is an underlying affinity between China and developing nations, where China’s focus on effective and strategic governance has made it indubitably the outstanding example of a developing country and its achievements have brought China considerable prestige in the developing world. Martin Jacques is an academic and journalist. He edited the influential magazine, Marxism Today, and co-founded the think-tank Demos in 1993. He has written for The Times, Sunday Times, Guardian and The New Statesman. 5. Anatomy: Who Should Decide Education Policy? Joint event with The National Young Fabians: Panel Discussion Monday 28th October, 6-8pm The Elton-Bowring Room, Memorial Court, Clare College The objective of this event is to analyse the role of different stakeholders in our Education system and address what responsibilities they have – fulfilled or not – and how they can contribute to improving our education framework. There will be no guest speaker; the focus will be on our members’ contributions and any conclusions reached will then be fed into a National Anatomy event on this topic at Westminster Palace the following evening. 6. “The Spirit of ’45” in 21st Century Britain Joint Event with the Cambridge People’s Assembly Against Austerity Film showing, followed by discussion with Ken Loach Thursday 7th November TBC Ken Loach’s new film “The Spirit of ‘45” looks back to the excitement of the 1945 General Election and the euphoria at Labour’s win. Clement Attlee’s first majority Labour government achieved huge things for the nation and created a sense of solidarity that lasted for forty years. But the arrival of Margaret Thatcher in Downing Street changed all this; British society became more individualist, less cohesive and infinitely more unequal. Can we ever get back to that “Spirit of ‘45”? Join us as we watch the film and discuss its implications in modern day Britain, with director Ken Loach in the hot seat.