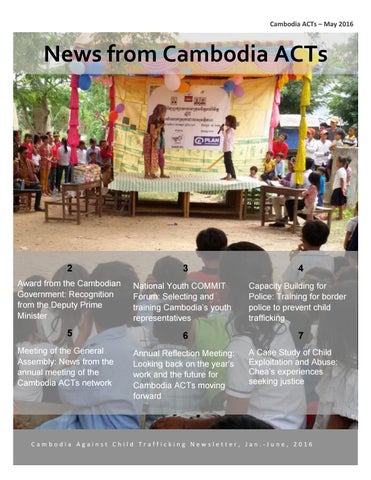 2 Award from the Cambodian Government: Recognition from the Deputy Prime Minister

6 Annual Reflection Meeting: Looking back on the year’s work and the future for Cambodia ACTs moving forward

On February 25, 2016, Cambodia ACTs received an award from Deputy Prime Minister Sar Kheng for collaboration with the NCCT The award, which was presented during the Ministry of the Interior’s Annual Meeting, is to show the government’s appreciation for Cambodia ACTs’ work to counter human trafficking. Secretary General Eang Sengeav received the award on behalf of the organization. This award was granted by the National Committee for 2

Counter Trafficking, with whom Cambodia ACTs continues to positively collaborate. Cambodia ACTs signed a Memorandum of Understanding (MOU) with NCCT in August, 2014, for its cooperation to fight against human trafficking, which allows them to work very closely on activities in support of the National Plan on Action.

This award reinforces the importance of efforts to fight child trafficking in Cambodia and it is a show of support from the government on progress being made. Also recognized for their strong collaboration with the NCCT were fellow NGOs USAID, Winrock, UNACT, Terre des Hommes, APLE, World Vision, and Chab Dai. There are still many challenges to overcome, but Cambodia ACTs is proud to have the support of the NCCT moving forward in the fight against human trafficking.

Individuals from 15-24 years of age were eligible to apply, and 60 were selected for the national forum from April 20-22. The youth received training from sponsoring NGOs about human trafficking so they would be as informed as possible. This type of training prepares them to be active participants in the regional forum, if selected. Cambodia ACTs was proud to help fund this process, and to coordinate the other supporting organizations, planners,

parents, and youth to participate. Utilizing the Cambodia ACTs network for this endeavor spread the word about the forum to eligible participants and simultaneously raised awareness about human trafficking. This National Youth COMMIT Forum prepared those selected to move onto the regional conference and communicate Cambodia’s experiences on an international scale, meeting with youth representatives from across Asia. This effort to engage the next generation of Cambodians with the challenges facing the country also signifies the possibility of cooperation between regional actors to work toward a future free of trafficking for the youth of Asia.

The police are some of the most important stakeholders in child trafficking prevention. The Cambodian border police especially have a unique opportunity to recognize instances of trafficking and act against perpetrators. On May 17 and 18, Cambodia ACTs in cooperation with the NCCT, conducted training for 51 police and military police officers in Svay Rieng Province and Prey Veng Province. Safe Migration and Mechanism Against Human Trafficking workshops are one of the ways Cambodia ACTs works to reduce trafficking by educating the relevant stakeholders. With funding from Terre Des 4

Hommes Netherlands, the National Committee for Counter Trafficking provided the training, while network members SantiSena Organization and the Children and Life Association both collaborated on the workshops. Training police stakeholders will empower them with an increased understanding of both how trafficking takes place and how they can intervene. It is crucial for the police to actively engage with the issue and to learn how to address it in order for the work of NGOs and political officials to make a difference. Survivors and their family often first go to the police if they are able to report trafficking cases, making it a necessity that police understand the complexities of the issue and how to help.

At the border, police can be the last hope of individuals being exploited through human trafficking. The ability to identify the crime and intervene before the border is crossed can prevent trafficking from occurring and ultimately it can save lives. Without well-trained police, justice is impossible. Safe Migration and Mechanism Against Human Trafficking workshops are an integral part of this process.

Meeting of the General Assembly Donors and members of the Cambodia ACTs network came together to review the year and discuss the future of the organization On March 10, 2016, the members of Cambodia ACTs’ network united in Kep Town for their annual meeting of the General Assembly. Representatives from ten member organizations including CLA, CFS, COCD, SCC, KNKS, SSO, WOMEN, VCAO, CWDA and CWCC were all in attendance. Donor representatives from Plan International Cambodia and Terre Des Hommes Netherlands also

participated in the meeting. The meeting focused on the progress of Cambodia ACTs and future directions. Secretary General Eang Seangeav presented the organization’s strategic plan for 2016 to 2020. The new plan highlights the main directions for the organization: programs and innovations, policy and advocacy, and institutional strengthening. This plan was developed by an

external consultant and members recommended implementing a timeframe for meeting each target. Members additionally discussed the future directions of donors Terre Des Hommes Netherlands and Plan International with the their representatives. Core program themes and strategic frameworks were presented. Cambodia ACTs looks forward to implementing these strategies in the next year.

Annual Reflection Meeting The staff of Cambodia ACTs travelled together to Vietnam May 27-­‐29 for an annual retreat and reflection on the last year 2015-16 was a year of growth and development for the Cambodia ACTs network and staff. The creation of a strategic plan for the next five years, capacity building with numerous trafficking stakeholders, legal support for trafficking and abuse survivors, and an absolute commitment to furthering children’s rights were central to the organization’s work this year. It is hard to move forward without first

looking back, and so the staff of Cambodia ACTs departed from the office in Phnom Penh and bussed together to Vietnam. They stayed on Phú Quốc for a weekend of activities and reflection. Secretary Genereal Eang Seangeav led the reflection meeting, and the discussion focused on past strengths, weaknesses, and goals for the organization moving forward.

In addition to the Annual Reflection Meeting, staff members toured local factories and markets, took in the beauty of the island, and went on an excursion to Vinpearl Land – an amusement park with numerous rides and attractions. These bonding experiences brought the staff together to celebrate a year of hard work and many successes. On Sunday, May 9, the staff returned together to Phnom Penh. The reflection on the previous year helped to motivate, focus, and prioritize projects for next year.

Attack in Kandal Province: A Case Study 12-­‐year-­‐old victimized but finds support from family and local NGOs to pursue justice from her attacker

When Chea* was 12 years old she would regularly sell fried bananas in her local market in Kandal Province until 4pm. On her walk home from work one day she was nearing a papaya plantation when a 26-year-old man attacked her. She was raped at the plantation and when she was able to leave she cried as she walked home, hurt and afraid. She told her stepmother what had happened and a police report was filed immediately, leading to the arrest of her rapist. Chab Dai organization was contacted and provided a support package to the victim, also having a medical examination performed. The case was then referred to Cambodia ACTs to provide legal support so Chea and her family could sue her attacker. Chea was also temporarily transferred to the Garden of Hope Shelter where she received counseling and was secure while her court case was ongoing.

The legal team from Cambodia ACTs fought for Chea in court and eventually the perpetrator was convicted of rape and sentenced to seven years in prison and a fine of eight million riels ($2000) compensation to Chea. Cambodia ACTs has followed up with Chea at the Garden of Hope Shelter where she remains while the perpetrator’s appeal is heard in court. Chea’s case is ongoing, but unfortunately even at this stage it is not representative of the majority of rape cases against children in Cambodia. Many obstacles stand in the way of children who report abuses – having their story believed, being protected from further abuse, and accessing resources to bring offenders to justice can all present insurmountable challenges. The work of Cambodia ACTs and all partner NGOs endeavors to both prevent these crimes from taking place and, when that fails, to ensure children’s rights are protected by offering them legal support to overcome the obstacles in their way. *False name to preserve anonymity

Made possible by the generosity of our donors: