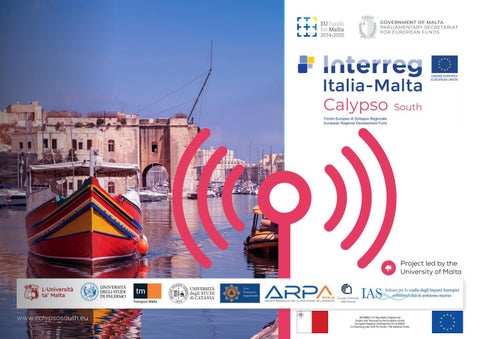 Project led by the University of Malta

CALYPSO was a two-year project partly financed by the EU under the Operational Programme Italia-Malta 2007-2013, and coordinated by Prof. Aldo Drago from the Physical Oceanography Research Group of the University of Malta. This brought together three other partners from Malta – namely Transport Malta, Civil Protection Department and Armed Forces of Malta – and four partners from Sicily – ARPA Sicilia, IAMC-CNR Capo Granitola, Università degli Studi di Palermo (UNIPA) and Università di Catania (CUTGANA). The consortium consisted of research entities and also public entities with responsibilities for civil and environmental protection, surveillance, security and response to hazards. The main project deliverable was the setting up of a permanent and fully operational HF radar observing system, capable of recording (in real-time with hourly updates) surface currents in the Malta-Sicily Channel. The system consists of HF radar installations on the northern Malta and southern Sicilian shores at selected sites and combines stations to elaborate and publish data to users. Partners shared experiences and built on existing practices and undertook new joint initiatives targeting key problem issues that put at risk the coastal and marine resources especially from oil pollution at sea. The project further envisaged the participation of public authorities to enable the full exploitation of the system, improve exchange of information and prepare a common base for joint interventions in the case of accidents and emergencies. The project also served for capacity building in the monitoring of the coastal seas and adjoining resources. The routine acquisition of multi-disciplinary, spatially widespread, long-term data sets of the ocean and coastal seas has triggered an unprecedented leap in the economic value of ocean data and information, and has additionally target multiple applications and users. CALYPSO put Malta and Sicily at the forefront of such initiatives in the Mediterranean and has served as a stepping stone to add on to the system in the future to have a coverage of the full marine space around the Maltese Islands and the Sicilian perimeter including the coastal areas.

SAFEGUARDING OF MARINE AND COASTAL RESOURCES FROM IRREVERSIBLE DAMAGES 4

CALYPSO FO was a six-month intensive project which built on the achievements of the previous, successful CALYPSO project. It delivered a more robust HF radar monitoring system of sea surface currents in the Malta-Sicily Channel with the installation of an additional radar on the Sicilian side. Through this project, the data from the CALYPSO HF Radar network helped to shed new insights on the dynamics of the sea in this part of the Mediterranean. This lead to research efforts related to improved forecasting of the marine environment, protection from oil spills, search and rescue, and fisheries. The partnership comprised one Maltese partner, the Physical Oceanography Research Group from the University of Malta, and four Sicilian partners: University of Palermo (Polo Territoriale Universitario della Provincia di Trapani), L’Istituto per l’Ambiente Marino Costiero del Consiglio Nazionale delle Ricerche (IAMC-CNR), University of Catania (CUTGANA) and ARPA SICILIA (Agenzia Regionale per la Protezione dell’Ambiente). Coast guards, civil protection organisations and local environmental protection agencies in both Malta and Sicily benefitted from this new technology, as did companiesmanaging oil extraction platforms and tourist organisations that rely on unspoilt coastlines and safer maritime transportation.

CALYPSO South addresses the challenges of safer marine transportation, protection of human lives at sea, and safeguarding of marine and coastal resources from irreversible damages. It is a commitment to put technological advancement and scientific endeavour at the service of humanitarian responses, reducing risks in sea faring, and protecting the marine environment. This project follows the trail of the previous CALYPSO and CALYPSO Follow On initiatives, with the overall objectives of extending the CALYPSO HF radar network coverage to the western part of the Malta-Sicily Channel and the southern approaches to the Maltese archipelago. Collected data, combined with numerical models, are intended to primarily support applications to optimise intervention in case of oil spill response as well as endow tools for search and rescue, security, safer navigation, improved metro-marine forecasts, monitoring of sea conditions in critical areas such as proximity to ports, and better management of the marine space between Malta and Sicily. The project is a further building block towards the phased creation of permanent structures encompassing a comprehensive Marine Electronic Highway in the area.

Installing a network of meteo stations

Setting up of the PORTO web interface.