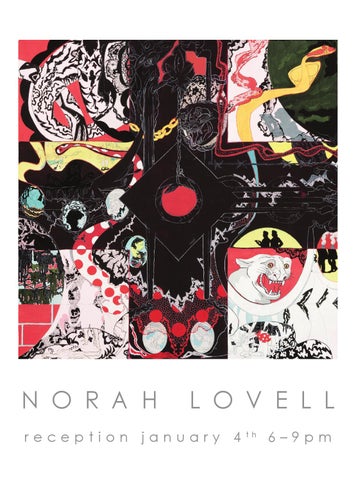 BENEATH THE SHADES Rich with embedded narratives and symbols, Norah Lovell’s works beckon viewers into worlds of intrigue and fascination. Visually and thematically complex, they pose questions that invite our active engagement in a conversation between line, color, and ideas. In this exhibition, Lovell presents three series of works in pencil and gouache on paper: a diptych entitled Red Cross, a four-piece ensemble called Master of Hounds, and a dozen pieces collectively titled Untwinned Horn. For the latter series, Lovell worked on a new piece each month for an entire year, interpreting riddle poems from the 10th Century A.D. and from the work of contemporary poet Richard Wilbur. Written from the perspective of an enigmatic, unnamed object, each poem offers clues to its nature and identity, which the reader endeavors to guess. Lovell uses these riddles as points-of-departure for a process of layering imagery into a filigree of disparate elements such as faces, flowers, trees, animals, playing cards, and fanciful decorative patterns. Intricately intertwined, these elements harken to the traditions of illuminated manuscripts, Celtic knots, and the lushly stylized vegetation of Art Nouveau. The finished works are sumptuous pastiches, which reward the attentive viewer with a dense roux of optical and conceptual interest. Lovell earned her master-of-fine-arts degree at the University of Chicago. She has exhibited widely and participated in prestigious artist residencies such as the Emily Harvey Foundation residency in Venice, Italy. In 2013, the Joan Mitchell Foundation named her one of only ten artists selected for its NOLA (New Orleans Local Artists) Studio Program. Her works are known for their meticulous structure and sophisticated deployment of color. “For me, color operates symbolically,” she explains. “It has a content of its own. I use it the way symbolists like van Gogh or Gauguin used it. When it turns up, it’s almost like an actor in a play.” There is a suggestion of mathematical perfection in these elaborate tableaux, counterbalancing their aura of ambiguity, romanticism, and mystery. “There’s an insistence on detail,” she says. “Everything seems very intentional. Nothing is random, although I don’t lock the meaning down; I allow things to hover, so people can come up with their own solutions.