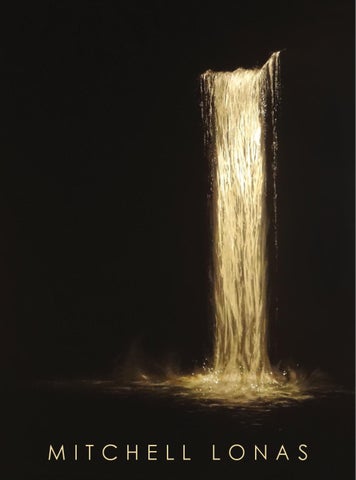 ZELMA With Zelma, his third solo exhibition at Callan Contemporary, Mitchell Lonas evolves his popular series depicting bird nests and floating feathers, and debuts a new body of work devoted to the power and serenity of waterfalls. Lonas’ works on painted and incised aluminum panel have won acclaim for their unique and sophisticated technique, which blends aspects of drawing, painting, and sculpture. He continually hones this technique as he reinterprets signature motifs and portrays new subject matter, modifying his customized tools to afford greater detail, reflectivity, and depth within the incised lines. Drawing from the influences of traditional Chinese painting and the modernist idioms of lyrical abstraction and minimalism, Lonas captures both the majestic and soothing qualities of the waterfall, whose continuous motion and constant form make it an enduring symbol of dynamism and infinite potentiality. Lonas, who studied art history at the University of Tennessee in Knoxville, is featured in significant private, public, and corporate collections, and has been commissioned to create large-scale works for Fortune 500 companies. His love of nature permeates his work, which captures moments, places, and phenomena that have a contemplative beauty that might otherwise go unnoticed. With the waterfall, he has added a visually seductive motif to his visual vocabulary. The fluid sheets, arcs, and atomized flecks of water appear to dance with the light source as viewers observe the works from different vantage points. “I want to express the pinnacle of the celebration of nature,” Lonas remarks. “In the floating feathers, the nests, the waterfalls, I’m focusing on elements of nature and reducing them to their essences. I want to leave room for the viewer to fill in some of the blanks and have their own interpretation.” By isolating key motifs before a black matte background, the artist creates a meditative environment, suspended in space and time. There is a feeling of hovering, of weightlessness, of being transported to a quadrant of the natural world that is somehow both familiar and exotic. In all phases—from inspiration to execution to the final nuances of presentation—Lonas has seamlessly married technical mastery to metaphoric potency, beckoning viewers into a gleaming realm of sublime experience.