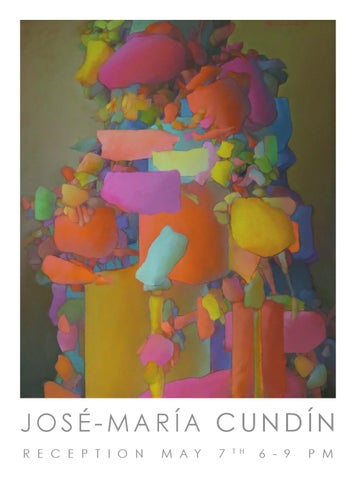 A BASQUE REVIEW (De Profundis) Following his dynamic exhibition last fall at the Imperial Calcasieu Museum in Lake Charles, internationally acclaimed painter and sculptor José-María Cundín returns to Callan Contemporary with A Basque Review. This imaginative and insightful suite of oil paintings speaks in a mysterious visual vocabulary that is at once abstract and familiar. Finessing the lines between Baroque figuration, high modernism, and postmodern pastiche, Cundín conjures enigmatic vignettes that may be interpreted as abstracted portraits, still lifes, or landscapes from an alternate universe. His style is wholly unique and instantly recognizable: compositional elements gathering together in space with architectural precision—as if floating, expanding outward, or folding inward. With a cosmopolitan sophistication that mirrors the artist’s colorful personality, the paintings balance playful absurdism and deeply felt nostalgia with subtle historical and political commentary. Cundín was born in 1938 in the Basque Country of Spain, home to a strong, stoic people who have endured upheaval and tragedy. With wordplay, wit, and gentle satire, Cundín imbues his paintings with references to his homeland’s turbulent journey through time. As a boy, Cundín was exposed to paintings by prominent Basque painters such as Augustin and Ramon Zubiauarre, José Maria de Ucelay, and Genaro Urrutia, all of whom influenced his aesthetic development in varying ways. After leaving Spain, Cundín traveled widely, living in Bogotá, Colombia, and New York City before moving to New Orleans in 1964. Today, in his studio in Folsom, Louisiana, he creates the paintings and sculptures that have earned a place in many of the world’s most prestigious private, corporate, and museum collections. The paintings to be displayed at Callan Contemporary are bold and assured, yet exquisitely sensitive, and alive with rich primary colors and pastels. Some are presented in customized frames inscribed with stenciled text related to the images’ content. A separate body of work shimmers with gold leaf and sepia tones, which evoke Byzantine paintings viewed by flickering candlelight. The subjects of these artworks do not fall into fixed, easily definable caricatures, but rather stand in for ideas or identities at the crossroads of the artist’s vision and the viewer’s interpretation. Their symbolism is not specific, but open-ended. “The more universal,” Cundín maintains, “the more value.” These haunting, fanciful shapes “represent conceptual forces, treatises, tendencies, virtues, defects, or vices. They are entities with destinies.” RICHARD SPEER