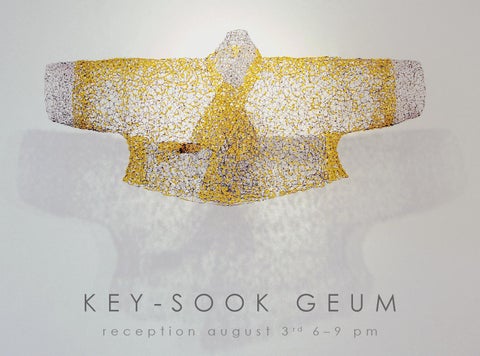 DREAM A DREAM Individual and cultural identity are as tightly interwoven as the meticulously entwined beads, crystals, and semiprecious stones in Key-Sook Geum’s extraordinary sculptural objects. In Dream a Dream, her third solo exhibition at Callan Contemporary, Geum uses her signature materials and techniques in poignant new ways. Following on the heels of her work with historical and contemporary sartorial forms (dresses, vests, jackets, and robes), the South Korean artist is now revisiting her heritage by reinterpreting traditional Korean garments from the Joseon Dynasty (1392-1897). The jackets and coats that cap these garments—called Jo-go-re, Jik-lyung, Jang-eui, Dang-eui, Jang-ot, and Du-ru-ma-ge—are elegant shapes with inherently sculptural properties. Their arms stretch out in broad, horizontal gestures, as if greeting the viewer with a welcoming embrace. Geum renders these vestments in a delicate web of faceted beads, amber, and Swarovsky crystals, held together within a net of intricately cut, bent, and twisted wire. With their eye-catching sparkle and the interlocking shadows they cast under directional lighting, the sculptures marry sumptuous visual glamour with thematic resonance. Geum’s works figure prominently in private, corporate, and museum collections around the world. A professor at the College of Fine Arts, Hongik University (Seoul), she has in recent years completed major commissions for corporations such as Argo Group and Royal Caribbean International. The works in Dream a Dream, while specific in their cultural origins, are conceptually universal; they suggest the human form but do not literally depict it. They are open: porous not only to air and light, but also to the viewer’s imagination and projection. “Various implications are possible,” the artist explains, “according to the viewer’s aesthetic, philosophy, values, and family traditions. While I was working on this show, I dreamed of the lives of the people who wore this style of dress in earlier days: their thoughts, their efforts to make a better life and a better society for coming generations.” In the glittering, dewdrop delicacy of Geum’s sculptures, a respect for the past points to new ways of seeing ourselves: “a message,” she suggests, “of optimism and hope for the future.” Richard Speer