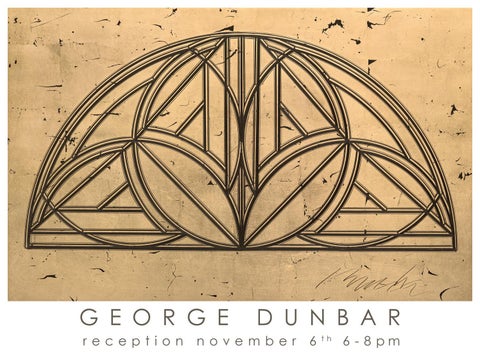 TORREGANO One of the leading and most respected artists of his generation, painter and sculptor George Dunbar (b. 1927) has earned an international reputation during the course of a brilliant, seven-decade career. At age 94 he has produced an entirely new body of work that reinterprets ongoing series. The exhibition has the character of a career retrospective, inviting viewers to survey a wide repertoire of techniques and media, which all bear Dunbar’s unmistakable artistic thumbprint. He deploys centuries-old techniques to transform clay and precious metallic leafs into sumptuous visual études that evince his technical mastery and aesthetic vision. He brings fresh iterations to signature motifs in stylistic periods such as Coin du Lestin, Bonfouca, Surge, and Rouville. Equally adept working in Hard-Edge or organic styles, he creates artworks of incredible complexity, which nevertheless manage to communicate effortlessness, elegance, and concision. Dunbar’s groundbreaking career began with studies at Tyler School of Art and the Grande Chaumière Academy in Paris. He was active in New York City at the height of Abstract Expressionism, exhibiting in 1953 alongside one of his heroes, Franz Kline. In 1957, when he returned to his native Louisiana, he co-founded the Orleans Gallery, the first artist co-op in the region’s history. Since those formative years—collected around the world, the subject of rave reviews in The New York Times, Art in America, and ARTnews—Dunbar’s paintings and sculptures have been acquired into prestigious private, corporate, and institutional collections, including the Whitney Museum of American Art and the British Museum, and has been honored with career surveys at the New Orleans Museum of Art, Ogden Museum of Southern Art, Hilliard University Museum, and North Carolina Museum of Art. Although the ever-changing landscape surrounding his studio on Bayou Bonfouca has influenced his work on a subconscious level, he is concerned not with the particulars of locale but the universal language of abstraction. Across time and a panoply of working methods, his work integrates rawness with sophistication, tying those polarities together with a potent concentration of compositional energy. Edward Lucie Smith has called this celebrated and beloved figure “a virtuoso at a time when virtuosity has become suspect...The story of his career is full of resonance for students of the contemporary American cultural scene.” Summing up Dunbar’s artistry and uncountable contributions to the cause of abstraction, the late critic Eric Bookhardt echoed the feelings of a wide community of art historians and connoisseurs when he pronounced Dunbar, quite simply, “a Renaissance man and an enduring legend.”