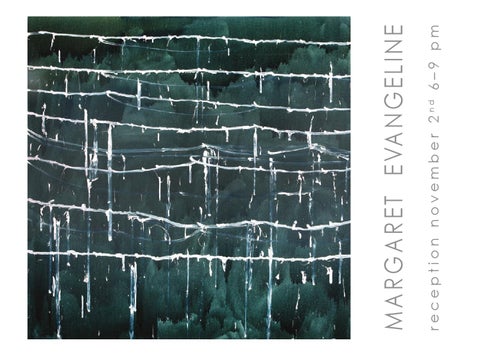 WE THOUGHT WE WERE DROWNING BUT IT WAS ONLY LOVE Margaret Evangeline is an artist who is very much at ease working in a range of media, a prodigiousness that is more than evident when one regards the trajectory of her notable career. That said, Evangeline always returns to painting at some point in her explorations and experimentations. The approximately one dozen paintings on view in this exhibition, almost all made in 2013, are shown under the enigmatic but resonant heading We Thought We Were Drowning But It Was Only Love. Evangeline’s titles for her projects are very carefully chosen, taken from many sources, including literature, philosophy and history and are integral to the meaning of her work, more so than is often the case. Although the words are not inscribed in the painting, they function like Cy Twombly’s elegant, elegiac texts, collaborating with the painted imagery. Evangeline, needless to say, is not interested in illustration as such or in the one-dimensional. She does not want her paintings’ ambiguities to be fixed. Her naming of her paintings, such as “Ahab My Captain Still,” “Dived for in the Deep,” “The Harpooneer,” (Queequeg who represents the uneasy merging of the so-called civilized and the savage and its subsequent unraveling), all three from Melville’s Moby Dick, is a way to tilt meaning toward allusions that reflect the artist’s ruminations and intentions but does not by any means limit the viewer’s readings. These new works are the latest manifestations of a sequence of paintings that is constantly evolving. Evangeline has a deeply ingrained sense of the past, of connections and continuities that in turn, becomes a sense of the present and future. These paintings, like the ones that preceded them, might be categorized as abstract, but they also always seem to have an embedded narrative, as if the force of her subjectivity has transcended the paintings’ formality and analytical structures in order to arrive at a veiled, wayward beauty and the infinities of the poetic. Her eschatological imagination, at its most compelling, borders on the rapturous. It wrestles with the clash of human aspiration for and against itself and against the inexorability of nature. It pits human hope and human failure against nature’s indifference, uncanny, poignant reflections on the human condition.

We Thought We Were Drowning But It Was Only Love