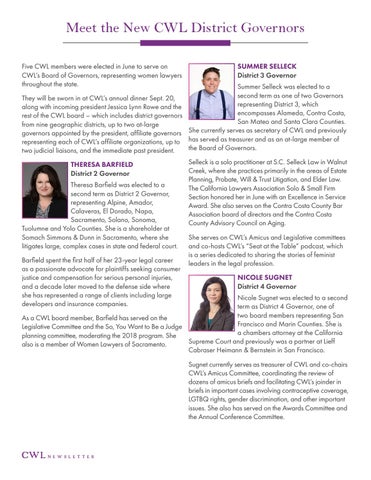 Meet the New CWL District Governors Five CWL members were elected in June to serve on CWL’s Board of Governors, representing women lawyers throughout the state.

Selleck is a solo practitioner at S.C. Selleck Law in Walnut Creek, where she practices primarily in the areas of Estate Planning, Probate, Will & Trust Litigation, and Elder Law. The California Lawyers Association Solo & Small Firm Section honored her in June with an Excellence in Service Award. She also serves on the Contra Costa County Bar Association board of directors and the Contra Costa County Advisory Council on Aging.

Summer Selleck was elected to a second term as one of two Governors They will be sworn in at CWL’s annual dinner Sept. 20, representing District 3, which along with incoming president Jessica Lynn Rowe and the encompasses Alameda, Contra Costa, rest of the CWL board – which includes district governors San Mateo and Santa Clara Counties. from nine geographic districts, up to two at-large She currently serves as secretary of CWL and previously governors appointed by the president, affiliate governors representing each of CWL’s affiliate organizations, up to has served as treasurer and as an at-large member of the Board of Governors. two judicial liaisons, and the immediate past president.

Theresa Barfield was elected to a second term as District 2 Governor, representing Alpine, Amador, Calaveras, El Dorado, Napa, Sacramento, Solano, Sonoma, Tuolumne and Yolo Counties. She is a shareholder at Somach Simmons & Dunn in Sacramento, where she litigates large, complex cases in state and federal court. Barfield spent the first half of her 23-year legal career as a passionate advocate for plaintiffs seeking consumer justice and compensation for serious personal injuries, and a decade later moved to the defense side where she has represented a range of clients including large developers and insurance companies.

She serves on CWL’s Amicus and Legislative committees and co-hosts CWL’s “Seat at the Table” podcast, which is a series dedicated to sharing the stories of feminist leaders in the legal profession. NICOLE SUGNET District 4 Governor

Nicole Sugnet was elected to a second term as District 4 Governor, one of two board members representing San As a CWL board member, Barfield has served on the Francisco and Marin Counties. She is Legislative Committee and the So, You Want to Be a Judge a chambers attorney at the California planning committee, moderating the 2018 program. She Supreme Court and previously was a partner at Lieff also is a member of Women Lawyers of Sacramento. Cabraser Heimann & Bernstein in San Francisco. Sugnet currently serves as treasurer of CWL and co-chairs CWL’s Amicus Committee, coordinating the review of dozens of amicus briefs and facilitating CWL’s joinder in briefs in important cases involving contraceptive coverage, LGTBQ rights, gender discrimination, and other important issues. She also has served on the Awards Committee and the Annual Conference Committee. California Women Lawyers promotes the advancement of women in the legal profession and is an active advocate for the concerns of women in so...

California Women Lawyers promotes the advancement of women in the legal profession and is an active advocate for the concerns of women in so...