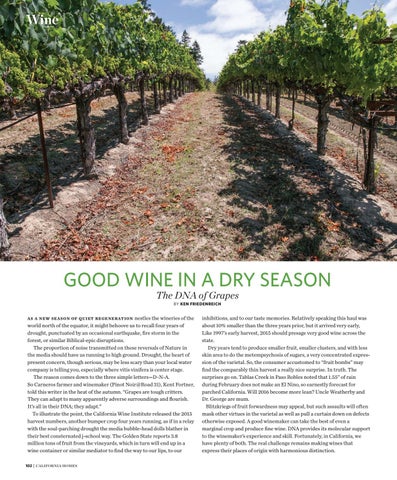 nestles the wineries of the world north of the equator, it might behoove us to recall four years of drought, punctuated by an occasional earthquake, fire storm in the forest, or similar Biblical-epic disruptions. The proportion of noise transmitted on these reversals of Nature in the media should have us running to high ground. Drought, the heart of present concern, though serious, may be less scary than your local water company is telling you, especially where vitis vinifera is center stage. The reason comes down to the three simple letters—D-N-A. So Carneros farmer and winemaker (Pinot Noir@Road 31), Kent Fortner, told this writer in the heat of the autumn. “Grapes are tough critters. They can adapt to many apparently adverse surroundings and flourish. It’s all in their DNA; they adapt.” To illustrate the point, the California Wine Institute released the 2015 harvest numbers, another bumper crop four years running, as if in a relay with the soul-parching drought the media bubble-head dolls blather in their best consternated j-school way. The Golden State reports 3.8 million tons of fruit from the vineyards, which in turn will end up in a wine container or similar mediator to find the way to our lips, to our

inhibitions, and to our taste memories. Relatively speaking this haul was about 10% smaller than the three years prior, but it arrived very early, Like 1997’s early harvest, 2015 should presage very good wine across the state. Dry years tend to produce smaller fruit, smaller clusters, and with less skin area to do the metempsychosis of sugars, a very concentrated expression of the varietal. So, the consumer accustomed to “fruit bombs” may find the comparably thin harvest a really nice surprise. In truth. The surprises go on. Tablas Creek in Paso Robles noted that 1.55” of rain during February does not make an El Nino, so earnestly forecast for parched California. Will 2016 become more lean? Uncle Weatherby and Dr. George are mum. Blitzkriegs of fruit forwardness may appeal, but such assaults will often mask other virtues in the varietal as well as pull a curtain down on defects otherwise exposed. A good winemaker can take the best of even a marginal crop and produce fine wine. DNA provides its molecular support to the winemaker’s experience and skill. Fortunately, in California, we have plenty of both. The real challenge remains making wines that express their places of origin with harmonious distinction. 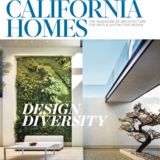