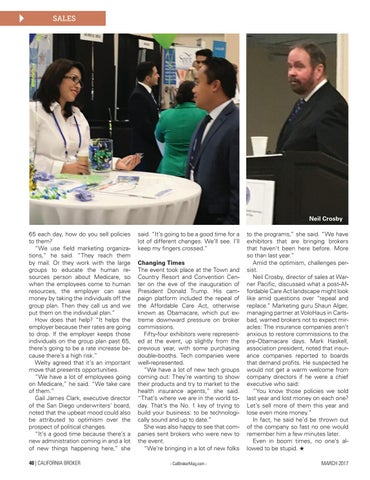 Neil Crosby 65 each day, how do you sell policies to them? “We use field marketing organizations,” he said. “They reach them by mail. Or they work with the large groups to educate the human resources person about Medicare, so when the employees come to human resources, the employer can save money by taking the individuals off the group plan. Then they call us and we put them on the individual plan.” How does that help? “It helps the employer because their rates are going to drop. If the employer keeps those individuals on the group plan past 65, there’s going to be a rate increase because there’s a high risk.” Welty agreed that it’s an important move that presents opportunities. “We have a lot of employees going on Medicare,” he said. “We take care of them.” Gail James Clark, executive director of the San Diego underwriters’ board, noted that the upbeat mood could also be attributed to optimism over the prospect of political changes. “It’s a good time because there’s a new administration coming in and a lot of new things happening here,” she 40 | CALIFORNIA BROKER

said. “It’s going to be a good time for a lot of different changes. We’ll see. I’ll keep my fingers crossed.” Changing Times The event took place at the Town and Country Resort and Convention Center on the eve of the inauguration of President Donald Trump. His campaign platform included the repeal of the Affordable Care Act, otherwise known as Obamacare, which put extreme downward pressure on broker commissions. Fifty-four exhibitors were represented at the event, up slightly from the previous year, with some purchasing double-booths. Tech companies were well-represented. “We have a lot of new tech groups coming out: They’re wanting to show their products and try to market to the health insurance agents,” she said. “That’s where we are in the world today. That’s the No. 1 key of trying to build your business: to be technologically sound and up to date.” She was also happy to see that companies sent brokers who were new to the event. “We’re bringing in a lot of new folks - CalBrokerMag.com -

to the programs,” she said. “We have exhibitors that are bringing brokers that haven’t been here before. More so than last year.” Amid the optimism, challenges persist. Neil Crosby, director of sales at Warner Pacific, discussed what a post-Affordable Care Act landscape might look like amid questions over “repeal and replace.” Marketing guru Shaun Alger, managing partner at VoloHaus in Carlsbad, warned brokers not to expect miracles: The insurance companies aren’t anxious to restore commissions to the pre-Obamacare days. Mark Haskell, association president, noted that insurance companies reported to boards that demand profits. He suspected he would not get a warm welcome from company directors if he were a chief executive who said: “You know those policies we sold last year and lost money on each one? Let’s sell more of them this year and lose even more money.” In fact, he said he’d be thrown out of the company so fast no one would remember him a few minutes later. Even in boom times, no one’s allowed to be stupid. H MARCH 2017 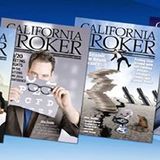