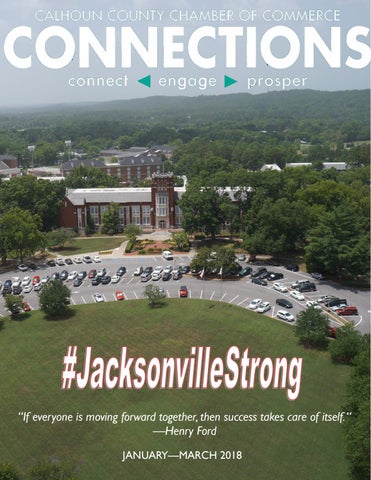 “If everyone is moving forward together, then success takes care of itself. “ —Henry Ford JANUARY—MARCH 2018

Thank you for your continued support and involvement in the Calhoun County Chamber of Commerce. Here are some of our significant third quarter accomplishments: Program Development 

Public Affairs Committee met on Thursday, Jan. 11th. Committee hosted the Mayors Roundtable on Monday, February 5th. Coffee and Conversations was on Monday, Feb. 19 with state legislators. 50 Chamber members were present to hear from the state delegation. Conversation with Congress was on held on Wed. Feb. 21st. 70 Chamber members were in attendance with an update from Senator Shelby. Chamber is participating in the BCA/CCA Legislative Conference calls. Public Affairs visited Montgomery with the LCC class to visit our legislators and discuss elements of our Legislative Agenda Hosted bi-weekly public affairs meetings to discuss the upcoming forums and to begin putting together a plan of action to advocate for Fiber Optics throughout Calhoun County Supported Senate Bill 149 which was passed for citizens in rural areas to have access to Broadband internet The Advocate Bulletin, updates on Legislation, is being emailed to members bi-weekly. The Public Forums sub-committee has planned the Forums for the upcoming elections.  Thursday, April 19th, Chamber of Commerce - Calhoun County Judges  Monday, April 23, Anniston City Meeting Center - County Commission  Thursday, April 26, Anniston City Meeting Center - County School Board  Thursday, May 10, Oxford Civic Center - State Representatives

The Chamber's 39th Annual Meeting had 300 in attendance. The Small Business Committee has begun planning the 2018 Night of Laughter & Business Awards, set for Tuesday, May 1. The Tax Seminar on the New Tax Legislation had 12 in attendance. The Chamber has begun sharing "Quick Tips" to our Youtube Channel in a playlist each week. We've also begun uploading videos of workshops offered for on-demand viewing. The Economic Forum on Friday, Feb. 23rd in partnership with JSU had 80 in attendance. The Chamber will be hosting a Business Readiness four week certification program in partnership with the Calhoun County EMA beginning April 12. We'll kick off our Coffee & Conversation series Tuesday, April 17, covering Government Procurement from 8-9 AM at the Chamber. Our next Business Basics Workshop will be with the City of Oxford, on Friday, May 4, at 10 AM at the Bynum Community Center. Get your tickets now for the Night of Laughter & Business Awards, set for Tuesday, May 1, beginning at 5:30 PM.

Serving on planning committee for Noble Street Festival, set for Saturday, April 7. The Chamber Staff will be in the information booth at the Noble Street Festival, April 7. January 22, we hosted an attractions meeting. Applying for grants, meeting with schools and planning with community members and organizations for a new education & quality of life program, set for August 2018. Attended first 2018 Cheaha Challenge Meeting, for the event set for Sunday, May 20. 128 Welcome Packets sent. March 3, the Chamber will again participate in JSU Preview Day at Pete Mathews Coliseum. The JSU Marketing Students collaborated in research, concepts and proposals, presenting to our marketing subcommittee on February 26 for the brand name development project. March through April , the JSU Graphic Design students in the JSU Art Department are researching, developing and designing new logo proposals for the Marketing sub-committee to review and select. March 3, we greeted more than 100 students and their family members at JSU's Spring Preview Day at Pete Mathews Coliseum. March 6 through 13, we hosted Brice Shirbach from PinkBike, the world's largest action sports website. Our feature story will be published soon and feature our community's cycling narrative.

January 4, the YMCA of Calhoun County hosted the Chamberâ&#x20AC;&#x2122;s Business & Biscuits at their Anniston location at 29 W 14th Street.

January 9, Youth Leadership Calhoun County toured Tyler Union and the Anniston Army Depot for their Industry Day. January 12, The Rustic Farmhouse celebrated the ribbon cutting for their location at 175 Plaza Lane in Oxford.

The Chamber Ambassadors held their monthly meeting on January 9 at the Chamber. The Ambassador program consists of enthusiastic volunteers from the Chamber membership who donate their time to help build member commitment and raise community awareness of Chamber activities and benefits.

January 24, Trinity Ceramics Gifts and More celebrated the business' new ownership with a ribbon cutting at their 1230 Noble Street location in Anniston.

January 25, the Chamber celebrated its 39th Annual Meeting at the Oxford Civic Center with more than 250 members and representatives in attendance. At the Annual Meeting, each year, we celebrate the many successes of the past year and preview our plan of action for the coming year, as we swear in the new Board of Directors and announce the Chairman’s Cup Recipient and Ambassador of the Year. 2017 Ambassador of the Year: Washin' Coin Laundry's Ken Barrett Ken has stepped up this year as the Ambassador Chair and continues to do all that is needed for our Ambassador program to grow and succeed.

The Chamber honored the late Joel Denney with the Brenda Dozier Hollis Chairman's Cup, and his wife Nancy and children, Jace & Jenny, were presented Joel's Chairman's Cup by Greg Brown. Joel Denney was a dedicated servant for this great community and this chamber, including leading the Military & Security Affairs Committee. It was our honor to present Joel’s Chairman’s Cup to Nancy Denney.

The Anniston Star’s Bob Davis honored Patty King with the Citizen of the Year.

Thank you to everyone who attended our "How will the new tax law affect you" Seminar with Warren Averett! If you missed the workshop, check out our YouTube channel for this workshop recording and more! February 1, Tans Down Under celebrated the grand opening of their second location at 1716 Hamric Drive East, Suite 1, in Oxford with a ribbon cutting.

Each fall and spring, the Chamber partners with schools and businesses throughout Calhoun County to provide students the opportunity to shadow in the career fields of their interest. If your business would like to participate in future job shadow days, please email krychelles@calhounchamber.com.

February 20, the Civilian Marksmanship Program hosted Business After Hours for Chamber Members at their South Range and air rifle facility on Sentinel Drive in Anniston.

February 14, Chamber members showed their love for the Chamber and joined us for Lunch & Leads at Noble Deli, in Alexander's at Noble Shops, located at 1118 Noble Street in Anniston.

February 21, Senator Shelby stopped by the Chamber for a chat with Chamber Members and members of the general public and to present an update from Washington during our Conversations with Congress.

Thank you to Bob and Carolyn Orchid for hosting our Hotel & Motel Meeting at their lovely Springwood Inn Bed & Breakfast, and thank you to all our hoteliers that were able to attend!

Each year, the Chamber & Visitors Center recognizes individuals from the hospitality and service industry that go above and beyond standard with the Recognition of Service Excellence Award. This year's event was hosted on February 28, at the Longleaf Botanical Gardens and featuring an update from Cheaha State Park. This yearâ&#x20AC;&#x2122;s honorees are: Yvonne Adams from Fairfield Inn & Suites Sharon Barnes from the Alumni House at JSU Sarah Burke at the Anniston Museums & Gardens Gwen Cherwaty at Panera Bread Oxford Kristy Farmer at Peerless Saloon & Grille Victoria Ginn at Fuji Japanese Cuisine Tydricka Groce at Hampton Inn & Suites Cyrus Hill at the Holiday Inn Express & Suites Deanna Jones at the Hampton Inn Jacksonville Christy Kowatch at the Hampton Inn Jacksonville Kellie McClanahan at Courtyard by Marriott Katina Shellings at the Home2 Suites by Hilton Nancy Turner from the Alumni House at JSU Gerald Walker at the Hilton Garden Inn Timothy Beard at Hotel Finial Mary Safford at the Hotel Finial Sarah Watson at the Hotel Finial

March 8, Murphy USA celebrated the groundbreaking for their walk in station expansion to include ethanol-free gas, and a larger facility to accommodate more customers at their Oxford Walmart location at 45 Plaza Lane.

On March 15, The Public Affairs Committee and the Leadership Calhoun County Class paired up to take a visit to Alabama's capitol for LCCâ&#x20AC;&#x2122;s State Government Day. Through a fun-filled day of touring the capitol buildings and observing the house floors in session, we heard from several elected officials and speakers about the importance of staying engaged in government efforts.

March 20, Alabama Power sponsored Business After Hours for Chamber Members at Classic Too.

Thank you to Dr. David Cummings for your contributions to the community and Chamber for over 30 years! #Longevity Check out our Quarterly Report from January through March 2018!

Check out our Quarterly Report from January through March 2018!