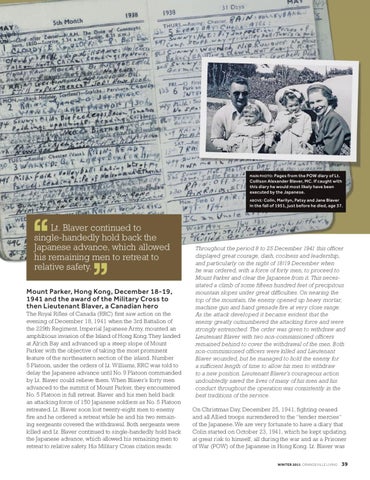 MAIN PHOTO: Pages from the POW diary of Lt.

Collison Alexander Blaver, MC. If caught with this diary he would most likely have been executed by the Japanese.

Lt. Blaver continued to single-handedly hold back the Japanese advance, which allowed his remaining men to retreat to relative safety.

Mount Parker, Hong Kong, December 18-19, 1941 and the award of the Military Cross to then Lieutenant Blaver, a Canadian hero The Royal Rifles of Canada (RRC) first saw action on the evening of December 18, 1941 when the 3rd Battalion of the 229th Regiment, Imperial Japanese Army, mounted an amphibious invasion of the Island of Hong Kong. They landed at Alrich Bay and advanced up a steep slope of Mount Parker with the objective of taking the most prominent feature of the northeastern section of the island. Number 5 Platoon, under the orders of Lt. Williams, RRC was told to delay the Japanese advance until No. 9 Platoon commanded by Lt. Blaver could relieve them. When Blaver’s forty men advanced to the summit of Mount Parker, they encountered No. 5 Platoon in full retreat. Blaver and his men held back an attacking force of 150 Japanese soldiers as No. 5 Platoon retreated. Lt. Blaver soon lost twenty-eight men to enemy fire and he ordered a retreat while he and his two remaining sergeants covered the withdrawal. Both sergeants were killed and Lt. Blaver continued to single-handedly hold back the Japanese advance, which allowed his remaining men to retreat to relative safety. His Military Cross citation reads:

Throughout the period 8 to 25 December 1941 this officer displayed great courage, dash, coolness and leadership, and particularly on the night of 18/19 December when he was ordered, with a force of forty men, to proceed to Mount Parker and clear the Japanese from it. This necessitated a climb of some fifteen hundred feet of precipitous mountain slopes under great difficulties. On nearing the top of the mountain, the enemy opened up heavy mortar, machine gun and hand grenade fire at very close range. As the attack developed it became evident that the enemy greatly outnumbered the attacking force and were strongly entrenched. The order was given to withdraw and Lieutenant Blaver with two non-commissioned officers remained behind to cover the withdrawal of the men. Both non-commissioned officers were killed and Lieutenant Blaver wounded, but he managed to hold the enemy for a sufficient length of time to allow his men to withdraw to a new position. Lieutenant Blaver’s courageous action undoubtedly saved the lives of many of his men and his conduct throughout the operation was consistently in the best traditions of the service. On Christmas Day, December 25, 1941, fighting ceased and all Allied troops surrendered to the “tender mercies” of the Japanese. We are very fortunate to have a diary that Colin started on October 23, 1941, which he kept updating, at great risk to himself, all during the war and as a Prisoner of War (POW) of the Japanese in Hong Kong. Lt. Blaver was WINTER 2011 ORANGEVILLE LIVING 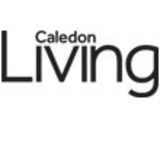