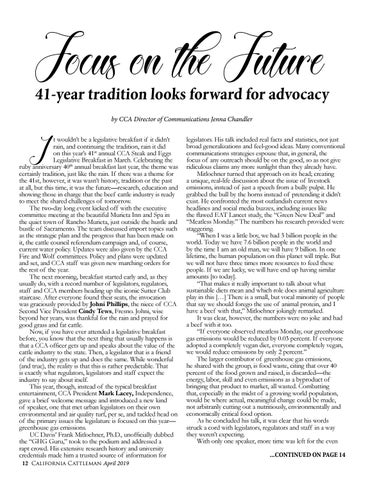 Focus on the Future

t wouldn’t be a legislative breakfast if it didn’t rain, and continuing the tradition, rain it did on this year’s 41st annual CCA Steak and Eggs Legislative Breakfast in March. Celebrating the ruby anniversary 40th annual breakfast last year, the theme was certainly tradition, just like the rain. If there was a theme for the 41st, however, it was wasn’t history, tradition or the past at all, but this time, it was the future—research, education and showing those in charge that the beef cattle industry is ready to meet the shared challenges of tomorrow. The two-day long event kicked off with the executive committee meeting at the beautiful Murieta Inn and Spa in the quiet town of Rancho Murieta, just outside the hustle and bustle of Sacramento. The team discussed import topics such as the strategic plan and the progress that has been made on it, the cattle council referendum campaign and, of course, current water policy. Updates were also given by the CCA Fire and Wolf committees. Policy and plans were updated and set, and CCA staff was given new marching orders for the rest of the year. The next morning, breakfast started early and, as they usually do, with a record number of legislators, regulators, staff and CCA members heading up the iconic Sutter Club staircase. After everyone found their seats, the invocation was graciously provided by Johni Phillips, the niece of CCA Second Vice President Cindy Tews, Fresno. Johni, wise beyond her years, was thankful for the rain and prayed for good grass and fat cattle. Now, if you have ever attended a legislative breakfast before, you know that the next thing that usually happens is that a CCA officer gets up and speaks about the value of the cattle industry to the state. Then, a legislator that is a friend of the industry gets up and does the same. While wonderful (and true), the reality is that this is rather predictable. That is exactly what regulators, legislators and staff expect the industry to say about itself. This year, though, instead of the typical breakfast entertainment, CCA President Mark Lacey, Independence, gave a brief welcome message and introduced a new kind of speaker, one that met urban legislators on their own environmental and air quality turf, per se, and tackled head on of the primary issues the legislature is focused on this year— greenhouse gas emissions. UC Davis’ Frank Mitloehner, Ph.D., unofficially dubbed the “GHG Guru,” took to the podium and addressed a rapt crowd. His extensive research history and university credentials made him a trusted source of information for 12 California Cattleman April 2019

legislators. His talk included real facts and statistics, not just broad generalizations and feel-good ideas. Many conventional communications strategies espouse that, in general, the focus of any outreach should be on the good, so as not give ridiculous claims any more sunlight than they already have. Mitloehner turned that approach on its head; creating a unique, real-life discussion about the issue of livestock emissions, instead of just a speech from a bully pulpit. He grabbed the bull by the horns instead of pretending it didn’t exist. He confronted the most outlandish current news headlines and social media buzzes, including issues like the flawed EAT Lancet study, the “Green New Deal” and “Meatless Monday.” The numbers his research provided were staggering. “When I was a little boy, we had 3 billion people in the world. Today we have 7.6 billion people in the world and by the time I am an old man, we will have 9 billion. In one lifetime, the human population on this planet will triple. But we will not have three times more resources to feed these people. If we are lucky, we will have end up having similar amounts [to today]. “That makes it really important to talk about what sustainable diets mean and which role does animal agriculture play in this […] There is a small, but vocal minority of people that say we should forego the use of animal protein, and I have a beef with that,” Mitloehner jokingly remarked. It was clear, however, the numbers were no joke and had a beef with it too. “If everyone observed meatless Monday, our greenhouse gas emissions would be reduced by 0.03 percent. If everyone adopted a completely vegan diet, everyone completely vegan, we would reduce emissions by only 2 percent.” The larger contributor of greenhouse gas emissions, he shared with the group, is food waste, citing that over 40 percent of the food grown and raised, is discarded—the energy, labor, skill and even emissions as a byproduct of bringing that product to market, all wasted. Combatting that, especially in the midst of a growing world population, would be where actual, meaningful change could be made, not arbitrarily cutting out a nutritiously, environmentally and economically critical food option. As he concluded his talk, it was clear that his words struck a cord with legislators, regulators and staff in a way they weren’t expecting. With only one speaker, more time was left for the even ...CONTINUED ON PAGE 14