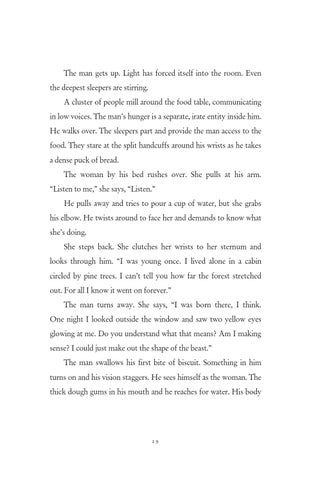 The man gets up. Light has forced itself into the room. Even the deepest sleepers are stirring. A cluster of people mill around the food table, communicating in low voices. The man’s hunger is a separate, irate entity inside him. He walks over. The sleepers part and provide the man access to the food. They stare at the split handcuffs around his wrists as he takes a dense puck of bread. The woman by his bed rushes over. She pulls at his arm. “Listen to me,” she says, “Listen.” He pulls away and tries to pour a cup of water, but she grabs his elbow. He twists around to face her and demands to know what she’s doing. She steps back. She clutches her wrists to her sternum and looks through him. “I was young once. I lived alone in a cabin circled by pine trees. I can’t tell you how far the forest stretched out. For all I know it went on forever.” The man turns away. She says, “I was born there, I think. One night I looked outside the window and saw two yellow eyes glowing at me. Do you understand what that means? Am I making sense? I could just make out the shape of the beast.” The man swallows his first bite of biscuit. Something in him turns on and his vision staggers. He sees himself as the woman. The thick dough gums in his mouth and he reaches for water. His body 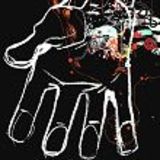 Lake of Earth, by William VanDenBerg

Lake of Earth, by William VanDenBerg