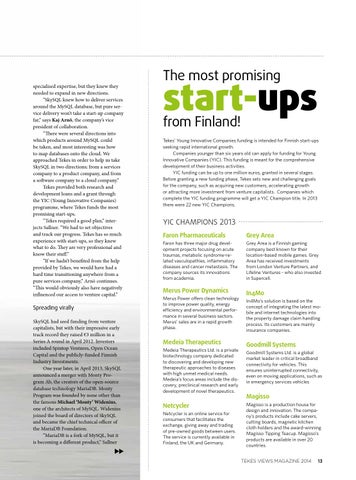 specialised expertise, but they knew they needed to expand in new directions. “SkySQL knew how to deliver services around the MySQL database, but pure service delivery won’t take a start-up company far,” says Kaj Arnö, the company’s vice president of collaboration. “There were several directions into which products around MySQL could be taken, and most interesting was how to map databases onto the cloud. We approached Tekes in order to help us take SkySQL in two directions; from a services company to a product company, and from a software company to a cloud company.” Tekes provided both research and development loans and a grant through the YIC (Young Innovative Companies) programme, where Tekes funds the most promising start-ups. “Tekes required a good plan,” interjects Sallner. “We had to set objectives and track our progress. Tekes has so much experience with start-ups, so they knew what to do. They are very professional and know their stuff.” “If we hadn’t benefited from the help provided by Tekes, we would have had a hard time transitioning anywhere from a pure services company,” Arnö continues. “This would obviously also have negatively influenced our access to venture capital.”

Spreading virally SkySQL had seed funding from venture capitalists, but with their impressive early track record they raised €3 million in a Series A round in April 2012. Investors included Spintop Ventures, Open Ocean Capital and the publicly-funded Finnish Industry Investments. One year later, in April 2013, SkySQL announced a merger with Monty Program Ab, the creators of the open-source database technology MariaDB. Monty Program was founded by none other than the famous Michael ‘Monty’ Widenius, one of the architects of MySQL. Widenius joined the board of directors of SkySQL and became the chief technical officer of the MariaDB Foundation. “MariaDB is a fork of MySQL, but it is becoming a different product,” Sallner

Tekes’ Young Innovative Companies funding is intended for Finnish start-ups seeking rapid international growth. Companies younger than six years old can apply for funding for Young Innovative Companies (YIC). This funding is meant for the comprehensive development of their business activities. YIC funding can be up to one million euros, granted in several stages. Before granting a new funding phase, Tekes sets new and challenging goals for the company, such as acquiring new customers, accelerating growth or attracting more investment from venture capitalists. Companies which complete the YIC funding programme will get a YIC Champion title. In 2013 there were 22 new YIC Champions.

Netcycler Netcycler is an online service for consumers that facilitates the exchange, giving away and trading of pre-owned goods between users. The service is currently available in Finland, the UK and Germany.

In4Mo In4Mo’s solution is based on the concept of integrating the latest mobile and internet technologies into the property damage claim handling process. Its customers are mainly insurance companies. 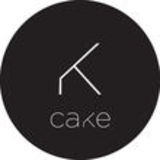