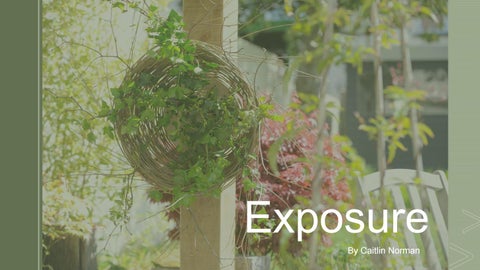 This body of work explores the combination of ceramics and willow in order to create functional wall mounted plant pots with an inbuilt trellis. The ceramic element houses a climbing plant such as Ivy, while the willow weaved in a traditional basket pattern creates the trellis for the plant to grow around. The surface of the ceramic pots is also designed in such a way as to encourage moss growth. The weaved element shelters the moss from direct sunlight and small holes hidden in the surface texture allow for drainage and moisture for the moss. Sustainability has been at the heart of this project and every element has been made with that at the forefront of the design process. The willow was grown locally using traditional methods and will be finished in a non-toxic preservative, free of volatile organic compounds that are highly damaging to the environment. The ceramic was only fired once, in a high temperature vitrify firing. Ceramics are usually fired twice and this reduction resulted in less pollution. High temperature firing also allowed the ceramic to become vitrified, meaning it is no longer porous and therefore highly durable and able to live outside in the harsh UK winter conditions. My hope is that as the plants intertwine with the trellis and the moss grows, with time they become more beautiful, creating living sculptures. In essence these pieces are made to be loved and to last.

Initial inspiration My initial inspiration for this project came from something as simple as staring at the wall in my garden. Tired, run down and cobbled together with different types of brick and stone, what caught my eye was the small green plants growing between the bricks. Trying to capture this within my work was the seed of an idea that allowed this project to grow. On a personal level I also decided that throughout this project I would make a conscious effort to be as sustainable as possible. I felt this was a crucial step in the progression of my practise. In a time of environmental turmoil, everyone must do their part.

After collecting my thoughts through mood boarding, I decided to create wall mounted plant pots with a unique trellis. My pots would mimic the rough and textured quality of the stone, while the trellis would provide the support to give the impression of plants bursting through the walls.

To inform the design of my pots I researched different types of climber plants, and the condition’s they need to thrive. I found that English Ivy or Hedera Helix was the perfect fit for my wall mounted plant pots. It is a very robust climber that doesn’t require a large pot and will survive in both moist and dry soil. Often seen growing around old buildings and encasing stone walls, English Ivy seemed like the perfect plant to burst out of my pots.

For the first part of this project we were in lock down. I made my first maquettes with materials I had available at home or could buy easily online such as paper, wire and air-drying clay. One of my initial designs was to create a removable trellis that was placed over the pot and could be rotated.

On return to the studio I progressed to experimenting with a stoneware clay known as Crank. I chose Crank, a grogged clay made from coarse materials which would mimic the rough texture of stone. While exploring the properties of this clay I found that it could be vitrified, or no longer be permeable to water. This would ensure that my pot would not leave a damp mark on the wall after being watered. Further discussion with a tutor lead to the discovery that a Crank pot could be vitrified with just one firing. This made it a more sustainable option over the usual process of an initial bisque firing, and then a further glaze firing.

I then tried to sculpt the rotatable trellis out of Crank, but ran into several problems. The clay trellis was extremely fragile and broke almost immediately. I also discovered that the prolonged intense heat of the vitrify firing on a structure such as this would have undoubtedly caused it to slump into a flat mess in the kiln.

Exploring other materials for the trellis After some market research I discovered that the combination of rattan and ceramic was becoming very popular. I purchased a small amount to explore its structural properties, and to see if it was a material I could work with. Structurally and in terms of ease of use it was a very suitable material. Further research into its production lead me to understand that rattan is not a sustainable material, only grown in Asia. After this discovery I decided to investigate more locally available options such as twigs and branches that had recently been felled in the woodlands close to University. During the experimentation with twigs I began to rethink the design of my trellis. I came to realise that the twigs would have to be weaved into the base of my pot creating a completely inbuilt trellis. I loved the organic nature of the twigs but found them to be extremely unpredictable and realised that this would cause difficulty in reproducibility. Considering a more reliable material I explored the use of Willow. Using Willow meant that I could create neat weaves that could be easily inbuilt to the base of my pots due to their uniformity.

I took the decision to use Willow to create my inbuilt trellis and began experimenting with the weave patterns. After trying a combination of different weaves I found the most aesthetically pleasing and reproducible to be the traditional basket weave. It also provided a beautiful nest shape for the Ivy to grow around and. Keen to add a more organic touch I found I could insert small twigs between the weave. I felt like this really elevated the design as it gave a sense the trellis was growing on its own even without the Ivy.

After my initial experiments with twigs to create an inbuilt trellis I modified the design of my ceramic pot by adding a base with holes to house the weave. However, the design changed again when using the willow as weaving a traditional basket pattern the rods that support the side of the basket are inserted into the side of the base and then bent upwards and weaved around to create a solid structure.

After adapting the front of the design my attention then turned to the back of the pieces. It was important to me that these pieces could be installed easily and carry minimal risk of falling off the wall. I also had to consider where the willow would sit within the back of the piece for safe and clean installation. I created a simple fitting that would accept hooks screwed into the wall. I also created small pieces for ends of the willow to slot into to ensure a neat finish.

I had originally intended for my pieces to live indoors in order to bring elements of the outside in. However, as they developed it became clear that these pieces would also be suitable to live outside. Considering some decoration, I tried to grow moss on the front of the pots as the texture I had created would be perfect for this. Unfortunately, due to it being so dry indoors it was not a suitable climate for the moss. However, I then began to consider whether it would thrive outdoors, it seemed that the trellis would provide shade from direct sunlight and with small drainage holes disguised within the surface texture all around the pot it would create the perfect damp environment for moss to thrive. It should also be noted that the clay being vitrified makes it very suitable for outdoor living, and would survive harsh weather such as frost.

The life span of Willow outdoors is around three to five years. To prolong the lifespan of my Willow weave I investigated several wood treatments. With sustainability in mind, I looked for nontoxic, chemical free options and came across Tiger Kit Wood Treatment. They recommended a single coat of the product finished with a coat of raw Linseed Oil. With this treatment, the lifespan of the Willow would increase to around six to eight years. To ensure that these pieces are not discarded when the Willow begins to degenerate, I would offer a re-willowing service where I would replace the old Willow to give these pieces a new lease of life.

Bringing all the elements of this project together, these are my finished pieces.

Watch me weave the willow here

Watch me render my pieces in an indoor setting This book contains the processes and decision making that led to the completion of my final University module; Exposure.

This book contains the processes and decision making that led to the completion of my final University module; Exposure.