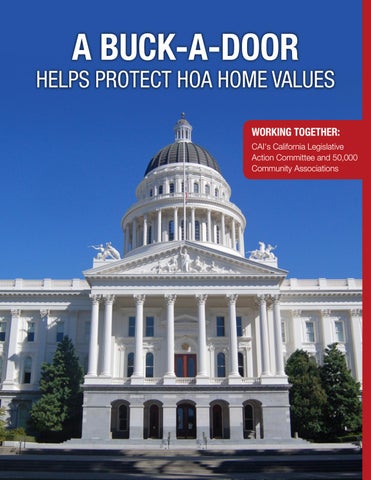 How HOA Boards Can Participate In The Legislative Process ABOUT CLAC

CAI’s California Legislative Action Committee (CLAC) represents HOAs in Sacramento by advocating on their behalf to protect associations from damaging legislation and to promote proactive legislation. CLAC is made up of members from the Community Associations Institute like you. As a member of CAI, you are automatically a member of CLAC. CLAC is directly supported by HOAs through the Buck-A-Door campaign, where HOAs give a dollar per household to CLAC annually.

Add CLAC financial support to your board agenda. This pamphlet will help make the case for your support. CLAC asks each HOA to donate $1 per door annually. CLAC is asking HOAs to make this annual donation part of their annual operating budget.

STEP TWO Customize the board resolution on page 6 for your specific association and add it to your board packet for the board’s consideration. An electronic version of the resolution is available on the CAI-CV website at www.cai-cv.org.

STEP THREE Make a motion to approve the enclosed Board Resolution and begin discussion. If you need additional information, please contact the CAI-CV office at 760-341-0559 or go to the CLAC website at www. caiclac.com. After discussion, call for a vote.

STEP FOUR When approved, ask your treasurer or manager to prepare and send a check directly to CLAC. Make the check payable to CAI-CLAC. The mailing address is 1809 S Street, Suite 101-245, Sacramento, CA 95811. IMPORTANT: Please indicate CAI-CV in the memo line so our local chapter is aware of your donation.

THANK YOU CAI is grateful to all HOAs who participate in funding our advocacy efforts in Sacramento. CAI-CV will publish your association’s name in Quorum Magazine and recognize you at our annual Legislative Update on Friday, November 15, 2019.

12 REASONS Why You Should Donate to CLAC CAI’s California Legislative Action Committee (CLAC) is a nonprofit educational organization dedicated to monitoring and influencing legislation that affects community associations in California. CLAC is proactive in introducing and advocating for legislation that is beneficial to homeowners associations (HOAs) and actively opposes legislation that may have an adverse impact on HOAs. CLAC has influenced legislation affecting many aspects of the Davis-Stirling Act, including covenant enforcement, elections, board meetings, assessment collection, electronic voting and resale disclosure. 1 Your donation gives your community a voice. CLAC’s legislative advocacy efforts are entirely dependent upon the support, opinions and experience of industry professionals and homeowner leaders. CLAC serves the interests of approximately 10,000,000 people who live in and work with HOAs in the state of California. CLAC communicates with legislators and other elected and appointed officials about HOA concerns through letters, phone calls and personal visits. 2 CLAC is dedicated to monitoring and influencing legislation that impacts HOAs in California. CLAC researches and reviews proposed legislation and takes positions on bills affecting HOAs. 3 CLAC meets regularly with lawmakers in their district and Sacramento offices to help advance HOA issues. CLAC educates lawmakers, legislative and executive staff, and other organizations. CLAC also testifies before legislative bodies. CLAC holds an annual Legislative Day at the Capitol in Sacramento where CAI members are invited to meet with legislators and advocate on important HOA issues being considered. 4 CLAC is not a Political Action Committee (PAC) and does not give money to legislators or their campaigns.

5 CLAC provides immediate action alerts and input on bills that affect HOAs. Legislators rely on CLAC input on HOA issues. HOAs rely on CLAC’s input on breaking issues and its ability to effectively influence the formulation and outcome of public policy. CAI members have access to timely information on bills related to HOAs at www.caiclac.com. 6 CLAC organizes “grassroots” advocacy efforts that include letters, emails and phone communications from HOA residents to elected officials on important HOA-related issues and proposed laws. 7 CLAC exercises members’ constitutional right to participate in the political process. CLAC builds important relationships with government officials and develops a network of peers that helps protect HOA home values. 8 Giving is easy and can be done online at www.caiclac.com or by filling out and returning the BuckA-Door donation form on page 6. 9 It is legal for HOAs to donate money from assessments to CLAC. The board may spend community funds on protecting the association and its owners by supporting constructive state legislation and opposing offensive legislation.

FOLLOWING ARE 12 IMPORTANT REASONS WHY YOU SHOULD DONATE TO CLAC. 10 Donations received are used for legislative advocacy, and may include printing and mailing expenses, lobbyist fees, and administrative services. 11 Senate and Assembly committees ask CLAC for input as HOA legislation is proposed and debated. CLAC is also contacted by the Governor’s Office for input about HOA legislation before it is vetoed or signed into law. 12 CLAC has become the recognized resource for providing accurate, timely and influential input to California legislators. CLAC employs a fulltime contract lobbyist in Sacramento. The CLAC representatives that determine industry positions on proposed legislation include representatives from the three major CAI membership categories: Homeowner Leaders (homeowners, HOA board members); Business Partners (attorneys, developers, reserve analysts, contractors, accountants, insurance representatives, and others) and Community Managers (managers and management companies). Each of the eight California chapters provides two delegates and one liaison to CLAC. If you are interested in serving on CLAC, contact the CAI-CV office.

EFFORTS OF CAI MEMBERS SB 1265 (WIECKOWSKI) – HOMEOWNER VOTING AND PRIVACY ISSUES, BOARD MEMBER QUALIFICATION LIMITS, VETOED AS INTRODUCED: This bill would have gutted homeowner privacy by allowing any owner to review and copy proxies and ballot envelopes with owners’ addresses and signatures. It would also have required community associations to post or mail the names of all owners eligible to vote, along with their assessor’s parcel numbers. The bill would have taken away associations’ rights to decide on qualifications to run for the Board. Associations would be forced to allow convicted felons to run for the Board unless the felony involved theft or embezzlement; they would be required to allow owners who haven’t paid their assessments to run for the Board anytime a payment plan is agreed to (and whether or not the owner is actually making payments), or if Internal Dispute Resolution has not been completed; and associations would have been prevented from allowing non-owners to run for the Board, regardless of what the bylaws said. Associations would have been barred from suspending any owner’s right to vote, regardless of provisions in the bylaws. The bill would also have required associations to begin preparing for their annual meetings five to six months in advance by imposing redundant notice requirements, and would have required owners to self-nominate at least 60 days before an election to appear on the ballot. POSITION: Opposed. CAI-CLAC mounted a successful grassroots effort to urge the Governor to veto the bill. RESULT: Gov. Brown vetoed the bill on September 30, 2018. INDUSTRY IMPACT: SB 1265 would have removed much of an association’s local control and imposed a once-size fits all approach, regardless of the desires of owners. The unintended consequences of this bill would have been worse than the abuses it attempted to cure. Voters would risk making their signatures and addresses open to photocopying by other owners. Associations would be compelled to allow convicted felons to run for the Board, but could not allow non-owners to run for the Board even if allowed by the bylaws. The bill would have eliminated associations’ rights to establish standards for voting, and it would have added more requirements for elections and self-nomination. CAI-CLAC is committed to good governance and fair elections while allowing members of California’s community associations to set rules and procedures that work for them. 4

SB 1128 (ROTH) – BOARD MEMBER QUALIFICATION LIMITS AND ELECTION BY ACCLAMATION, VETOED AS INTRODUCED: SB 1128 was intended to allow election by acclamation when certain procedures were followed, but was amended to include the overreaching candidate qualification and voting requirements also set out in SB 1265. SB 1128 would have allowed Board election by acclamation if: the association mailed (or emailed if the owner agrees) notice of the election and nomination procedure 30 days before nominations due date; the number of candidates did not exceed the number of open Board seats; the Board introduced a resolution to elect the candidates by acclamation and then approved the resolution at least 28 days later at an open meeting; the Board allowed an additional 21-day self-nomination period when the resolution is introduced; and at the end of the 21-day period the number of candidates still was less than the number of open seats. POSITION: CAI-CLAC changed its position from Support to Opposed after the bill was amended to add the restrictions on candidate qualifications. CAI-CLAC then mounted a successful grassroots effort to urge the Governor to veto the bill. RESULT: Gov. Brown vetoed the bill on September 30, 2018. INDUSTRY IMPACT: The election by acclamation provisions would have benefitted associations which chose to implement them, but the impact on associations’ local control, and the imposition of a one-size-fits-all approach led to CAI-CLAC’s decision to oppose the bill. With the Governor’s veto, community association members will retain their right to establish reasonable qualifications to serve on the Board, and will not be saddled with complicated and invasive election requirements. CAI-CLAC will continue to advocate for laws that streamline election procedures.

SB 261 (ROTH) – REVIEW OF PROPOSED RULES, EMAIL COMMUNICATIONS AS INTRODUCED: SB 261 will allow members who agree to receive email communications from community associations to send their agreement by email. It will also allow association Boards to adopt rules 28 days after sending them to members for review and comment, instead of 30 days. POSITION: Support RESULT: Signed into law, amending Civil Code Sections 4040 and 4360. INDUSTRY IMPACT: This common sense bill will make association governance a little easier. It will make it possible for associations to adopt rules at the next monthly Board meeting after they are sent for comment, and will eliminate the need for owners to mail in their agreement and to communicate by email.

SB 721 (HILL) – MANDATED INVASIVE TESTING FOR BALCONIES AND ELEVATED WALKWAYS COMMUNITY ASSOCIATIONS REMOVED FROM BILL AS INTRODUCED: SB 721 would have required community associations to inspect all balconies, stair landings, and other elevated wooden structures intended for people to occupy, every five years, and to correct any deficiencies immediately, or quickly. Invasive testing to inspect hidden components would have been required. POSITION: Opposed. RESULT: After over a year of grassroots efforts by CAI-CLAC, the bill was amended to remove community associations. It will now only impact rental apartments. INDUSTRY IMPACT: Community associations are already required to inspect major components every three years, and to disclose to members detailed information about the funds reserved to repair and replace those components. Moreover, associations are self-governed non-profit corporations, managed by the people who own and live in them. Eliminating a requirement that associations perform additional expensive testing will allow associations to use their funds to meet their other needs, and to avoid unnecessary and burdensome special assessments.

AB 2912 (IRWIN) – ASSOCIATION FINANCIAL PROTECTIONS AS INTRODUCED: AB 2912 will help associations put financial protections in place by requiring fidelity bonds in an amount equal to the reserves plus three months assessments, covering dishonest acts by the manager, computer fraud and wire transfer fraud. It will also require Board approval for funds transfers over $10,000 or 5% of the total deposits, whichever is lower, and will require at least two Board members to review financials monthly. POSITION: CAI-CLAC sponsored this bill. RESULT: Signed into law, amending Civil Code Sections 5380 and 5500, and adding Sections 5501, 5502, and 5806, effective January 1, 2019. INDUSTRY IMPACT: One unscrupulous act can devastate a community association. This bill will protect associations and homeowners by requiring that associations have insurance coverage to protect against theft in an amount consistent with industry recommendations. It will also provide Boards the tools to monitor finances and, specifically, transfers of association funds.

Name Secretary of the Association

Our thanks to the law firm of Richardson | Ober for preparing this sample resolution. An electronic version is available online at www.cai-cv.org. 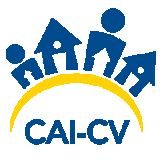