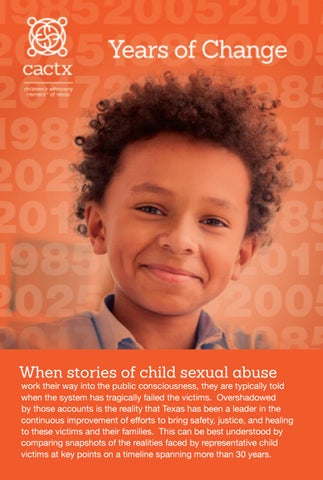 When stories of child sexual abuse

work their way into the public consciousness, they are typically told when the system has tragically failed the victims. Overshadowed by those accounts is the reality that Texas has been a leader in the continuous improvement of efforts to bring safety, justice, and healing to these victims and their families. This can be best understood by comparing snapshots of the realities faced by representative child victims at key points on a timeline spanning more than 30 years.

The Seeds of Awareness Before the country’s ﬁrst CAC opened in 1985, child victims of sexual abuse were unlikely to experience the three pillars of restoration – safety, justice, and healing. Instead, communities and agencies struggled to even discern the truth of what had happened to a child. In a culture of silence, driven by the prevailing inability to fathom the possibility that children could be sexually abused by a trusted adult, outcries were the exception. The rare victim whose story reached authorities was then forced to run the gauntlet of a system designed for adult victims, enduring a series of re-traumatizing interviews with police, child protection professionals, therapists, prosecutors, and others. This uncoordinated approach not only stressed its young victims, it often yielded testimony corrupted by the bias of untrained interviewers and the typical child’s fear-driven desire to please those in authority.

“The rare victim whose story reached authorities was then forced to run the gauntlet of a system designed for adult victims.”

In the absence of a formal means to coordinate investigations, life and death decisions were often made with limited information. Ineffective interventions, some fatal to the victim, were far too prevalent. In an effort to change the culture, the country’s ﬁrst children’s advocacy center (CAC) opened in 1985. Texans who visited the center in Huntsville, AL saw how its specialized services adapted the justice system to meet a child’s unique needs and brought the concept home. The ﬁrst CAC in Texas opened in 1989 in Amarillo.

After tearfully telling his mother about abuse he had endured at the hands of his uncle, Christopher described the incidents to an oﬃcer at the local police station. Over the next few weeks, he ended up re-telling his story to 12 different people from ﬁve different agencies. The uncle’s lawyer negotiated a 10-year probation. While Christopher’s mom did her best to support his recovery, she did so without access to therapeutic services or the support of her family who refused to believe the uncle would do such a thing.

Thanks to legislation signed by then-Governor George W. Bush in 1995, child victims of sexual abuse in Texas were beneﬁting from the expanding adoption of the CAC model with emphasis placed primarily on forensic interviewing and coordinated investigations. During the ﬁrst decade of development, when child victims of abuse living near one of the state’s 13 CACs mustered the courage to report, they received a forensic interview, integrated investigatory efforts, and some family support services. Later in the decade, centers began to plan for the addition of a greater depth of services that would include professional family advocacy and trauma-informed therapy. This ﬁrst decade of the new millennium was marked by the development of 47 CACs and expansion into 99 counties as well as efforts to lay the foundation to provide comprehensive services to children and families.

“Later in the decade, centers began to plan for the addition of a greater depth of services that would include professional family advocacy and trauma-informed therapy.”

After making an outcry to her math teacher, Sara’s story of abuse at the hands of her tennis coach led her on a journey through a successful forensic interview at the nearby CAC and into the courthouse where she watched her abuser’s conviction and sentencing. In the days that followed, she struggled to re-engage with school and life and needed mental health services. Her parents were unable to understand or respond to her post-traumatic behaviors.

WE BELONG TOGETHER, MARIAH CAREY

STAR WARS: REVENGE OF THE SITH

“...an astonishing number of courageous children have restored their essential selves.”

At present, the network of CACs employs more than 200 clinicians trained to provide evidence-based, trauma-informed therapy. Last year, more than 106,000 therapeutic sessions were delivered. 71% of clients initially diagnosed with signiﬁcant depression symptoms showed none after 12 therapeutic sessions. 52% of clients starting with post-traumatic stress disorder symptoms showed none after 12 sessions. As a result, an astonishing number of courageous children have restored their essential selves.

Madisonâ&#x20AC;&#x2122;s mother grew suspicious when she suddenly lost her interest in church youth group activities. When pressed, the honor student broke down and revealed that she had been abused by an adult volunteer at a church lock-in. While Madisonâ&#x20AC;&#x2122;s case is still being investigated, she and her family have left the church they attended for 22 years and are receiving therapy and comprehensive services at their

all children in need of CAC services appropriately served

Viewed on the timeline of our rich history, the CAC network has evolved in terms of expertise and effectiveness. These stories showcase the power of shared purpose and pragmatic action in serving the children we endeavor to help. Together, we work to bring safety, justice, healing, and restoration to child victims of abuse. We continue to be inspired by the progress being made in support of this mission. 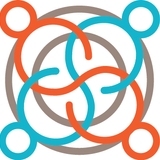