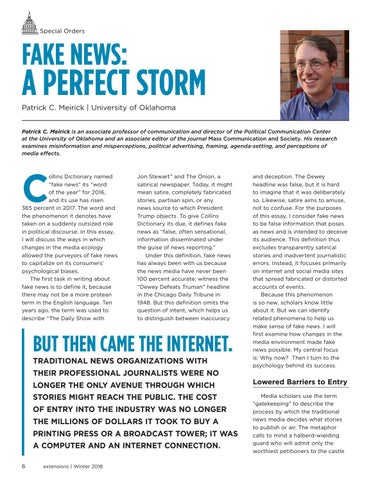 ollins Dictionary named “fake news” its “word of the year” for 2016, and its use has risen 365 percent in 2017. The word and the phenomenon it denotes have taken on a suddenly outsized role in political discourse. In this essay, I will discuss the ways in which changes in the media ecology allowed the purveyors of fake news to capitalize on its consumers’ psychological biases. The first task in writing about fake news is to define it, because there may not be a more protean term in the English language. Ten years ago, the term was used to describe “The Daily Show with

Jon Stewart” and The Onion, a satirical newspaper. Today, it might mean satire, completely fabricated stories, partisan spin, or any news source to which President Trump objects. To give Collins Dictionary its due, it defines fake news as “false, often sensational, information disseminated under the guise of news reporting.” Under this definition, fake news has always been with us because the news media have never been 100 percent accurate; witness the “Dewey Defeats Truman” headline in the Chicago Daily Tribune in 1948. But this definition omits the question of intent, which helps us to distinguish between inaccuracy

BUT THEN CAME THE INTERNET. TRADITIONAL NEWS ORGANIZATIONS WITH THEIR PROFESSIONAL JOURNALISTS WERE NO LONGER THE ONLY AVENUE THROUGH WHICH STORIES MIGHT REACH THE PUBLIC. THE COST OF ENTRY INTO THE INDUSTRY WAS NO LONGER THE MILLIONS OF DOLLARS IT TOOK TO BUY A PRINTING PRESS OR A BROADCAST TOWER; IT WAS A COMPUTER AND AN INTERNET CONNECTION. 6

and deception. The Dewey headline was false, but it is hard to imagine that it was deliberately so. Likewise, satire aims to amuse, not to confuse. For the purposes of this essay, I consider fake news to be false information that poses as news and is intended to deceive its audience. This definition thus excludes transparently satirical stories and inadvertent journalistic errors. Instead, it focuses primarily on internet and social media sites that spread fabricated or distorted accounts of events. Because this phenomenon is so new, scholars know little about it. But we can identify related phenomena to help us make sense of fake news. I will first examine how changes in the media environment made fake news possible. My central focus is: Why now? Then I turn to the psychology behind its success.

Lowered Barriers to Entry Media scholars use the term “gatekeeping” to describe the process by which the traditional news media decides what stories to publish or air. The metaphor calls to mind a halberd-wielding guard who will admit only the worthiest petitioners to the castle 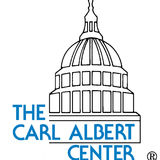