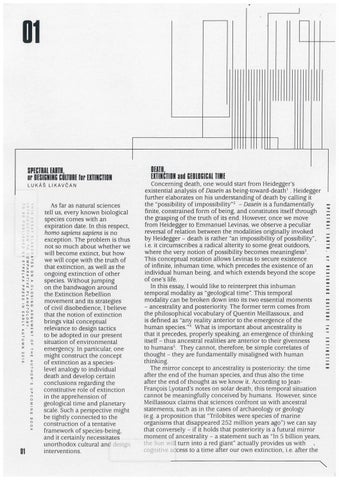 I am the curator of General Ecology at Serpentine Galleries in London, which is a relatively new position. The aim of it is to embed ecological principles in the widest possible sense of the word into all the programming that we do: we do ecology through ecology, but also events, publications, radio, and exhibitions. We think of ecology from species extinction all the way to plant intelligence and mysticism. It is a big and beautiful, and actually sometimes troubling, task.

I have to say that it was one of my favourite compliments – I guess I want to take it as a compliment. The Lithuanian Pavilion this year was a collaborative performance by three practitioners: Rugilė Barzdžiukaitė, Vaiva Grainytė and Lina Lapelytė. It comes together as a piece called Sun&amp;Sea (Marina) which is a completely readapted piece of an opera that they composed last year. It is durational, so it will be on from 10 to 7 o’ clock. Sun&amp;Sea (Marina) takes place in an artificially-lit indoor beach which the audience watches from the mezzanine. It is an incredibly stunning and – again – incredibly weird, sort of alienating place to see an opera, but also to see that kind of a scene feels incredibly natural: there are kids, there are dogs, you just have that kind of flow of people as if they were on a real beach. There is a series of songs which are the everyday worries and thoughts of the people on the beach as you would expect them to be, but underneath, over the course of the opera, which is one hour long, you get a sense of the growing anxiety about climate change issues. Jellyfish dancing around, plastic bags floating, but as they manifest through the everyday life of people. It is an opera that tries to address

What is your relationship with the city of Venice, what did you anticipate working here?

It is difficult to work in Venice. From the point of view of sustainability, the city raises some really important questions, even simply at the level of the materials that are bought in for the Biennale and whether they have a future life. There are several cooperatives and organisations that work within Venice to recycle those materials and make them available to art students. One of the works we really wanted to do with this Pavilion was to be more embedded in the city and that happened in three ways primarily. One of them is that the actors and the singers were mostly based in Venice. Secondly, the area where Sun&amp;Sea (Marina) takes place is located inside the military zone of the Arsenale – a restricted zone which has never been open to the public before. As a result, what we noticed yesterday was that we had an enormous amount of locals that came to see it, even just to see this part of Venice that they’ve never seen before and that’s normally left to tourism. And thirdly, the catalogue was also a way for us to work with and within the territory. It is designed by the collective L’Esprit de l’Escalier and it is a vinyl and cut combo, which is both printed and then screen-printed. The printing was done at Grafiche Veneziane which has the only lithographic printer in Venice, and the screen-printing was then done by a cooperative run by male inmates. So the physical transport of the finals between one and the other and the elements and the connection between these two was something that we were very keen on making happen. The hope is that this publication is a catalyst for further series of collaborations.

I’m a guest at the house of the author of this book. It’s pleasant and comfy atmosphere, I feel like laughing. But all of a sudden, the host starts massaging his temples, Closing his eyes, He says: I don’t feel too well, it’s back again, it’s time! Time for what? – I ask him, feeling concerned. And then he explains it all to me: I HAVE IN MY HEAD A TUMOR THE SIZE OF AN EGG, IT GIVES ME PAINS THAT I CAN HARDLY BEAR! I NEED TO EAT A HANDFUL OF SHRIMP, AND ONLY THEN DOES THE SUFFERING END. I HAVE TO GET SOME SHRIMP, QUICKLY, TAKE ME TO A RESTAURANT, UP THERE, ON THE HILL, INSIDE THE CASTLE…

incredibly serious and worrying material but with the relative ease and frivolity of a day at the beach.

He starts to panic, I say: OK.

Lucia Pietroiusti curated the Lithuanian Pavilion at the 2019 Venice Biennale. In this conversation, which took place during the preview days of the exhibition, Lucia did not yet know she was to receive the Golden Lion prize for best National Pavilion. Here she shares some insights into the process and challenges behind the “stunning, alienating, and weird” Opera Sun&amp;Sea (Marina).

I have to say that all of these initiatives were the product of many voices and many knowledges. We collaborated with a lot of people that know the city from the inside. It is less about having good ideas and more about listening.

This conversation is part of a series of interviews produced by The New Centre for Research &amp; Practice in collaboration with TBA21-Academy at Ocean Space, Chiesa di San Lorenzo during the preview days of the 2019 Venice Biennale. Image courtesy of Sun&amp;Sea (Marina), Lithuanian Pavillion