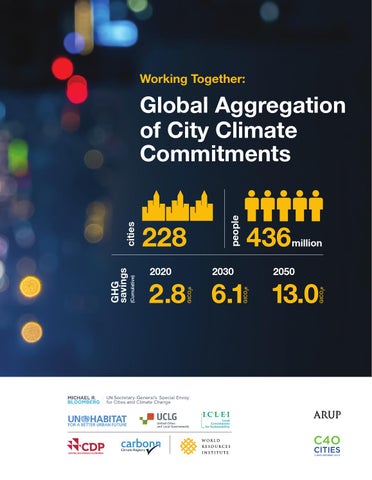 Significant commitments towards greenhouse gas (GHG) reduction have already been made by cities around the world:

This research was conducted by C40 Cities Climate Leadership Group (C40) and Arup, in partnership with ICLEI-Local Governments for Sustainability (ICLEI), United Cities and Local Governments (UCLG), UN Habitat, the UN Secretary- General’s Special Envoy for Cities and Climate Change and the World Resources Institute. Cities were selected from key global city sustainability network champions, including C40, UCLG and ICLEI to assess the existing public commitments that cities have voluntarily made to reduce their GHG emissions in order to catalyze more ambitious climate commitments.

228 global cities, representing 436 million people, have already set GHG reduction goals and targets. The greatest impact of these cumulative commitments will be felt in the period 2030 – 2050. Annual Results

The majority of city commitments are set for 2020 or 2050. As a result, the annual savings currently set for 2030 are lower than both these target years. The cumulative savings in 2050 are equivalent to the combined current annual emissions of China and India, while the annual savings are equivalent to the current annual emissions of South Africa.1

GHG reduction commitments matter because they drive action and further investment in cites. City governments with emissions reduction targets report three times as many emissions reduction activities as cities without targets.2 By demonstrating the impact of cities’ climate commitments on a global scale, this report is a first step in delivering the vision of the global Compact of Mayors, the world’s largest effort for cities to tackle climate change. The Compact will enable cities to publicly commit to deep GHG emissions reductions, make public existing targets and plans, and report on their progress annually, using a newly-standardized measurement system that is compatible with existing protocols. The report’s key findings, including cumulative reductions of 13 GtCO2e in 2050, reveal that city commitments are having an impact now. And, there are opportunities for greater commitments across more cities globally.

“By backing their commitments with sound measurement and planning, and sharing knowledge and experience, cities are taking action on the ground. C40 cities alone have doubled climate action in the last two years, reporting a total of over 8,000 actions across our global network.” C40 Chair, Mayor of Rio de Janeiro Eduardo Paes

Existing Commitments in Detail Cities are already taking significant action through commitments to reduce GHG emissions. The 228 cities in this study have publicly and voluntarily committed to a city-wide GHG reduction target. While the level and timescale of ambition among cities varies greatly, emissions targets for the cities in this report range from a 10% to a 100% reduction with timescales ranging from 2015 to 2050.

Figure 3 provides an overview of the commitments and their associated timeframes for the 228 cities in this analysis. As cities approach this milestone, it will be critical for them to make new commitments, creating an opportunity for them to increase their ambition. These new commitments, in turn, could encourage other cities around the world to follow suit in making commitments of their own. The majority of identified commitments are currently set in East Asia, Europe, and North America (Figure 4). These three regions account for the majority of committed reductions: 93% in 2020 and 94% in 2030 and 2050 respectively. Additionally, the largest 40% of cities account for over 80% of committed reduction across all three major timescales.

How Cities are Achieving Their Commitments

Cities take action on their commitments in a variety of ways. Leading examples include:

GHG emissions and reduction targets can be measured and reported in a number of ways. There are three main approaches: 1) savings against historical baseline; 2) savings against a projected business as usual; and 3) intensity savings (e.g. emissions per capita or per unit GDP). To compile a total savings figure for cities in this study, GHG emissions savings must be expressed in the same format, regardless of how they are reported in the source data.

Shenzhen has introduced a new-energy vehicle fleet of more than 6,000 units, making it the largest zero-emissions fleet in service worldwide. This project aims to add 35,000 new-energy vehicles to the fleet in the next two years. This project has enabled Shenzhen to significantly reduce CO2 emissions between 2009 and 2013. Rio de Janeiro has built 150 km of new bus rapid transit infrastructure, increasing the percentage of population using mass transit from 18% in 2009 to 63% in 2016. 450 km of bike lanes are planned by 2016 to further reduce automobile use. Dhaka’s Integrated Solid Waste Management Plan aims to re-engineer and improve waste disposal sites. Through the development of new sites, in addition to enhancements to existing ones, Dhaka aims to reduce emissions by 276,000 tonnes annually, with a goal of collecting 68% of the waste produced in the inner metropolitan area.

The “New Taxi for London” project aims to develop new zero emission-capable vehicles with manufacturers to meet a goal of reducing emissions from London’s black taxi fleet by up to 100% in central London and around 75% in the rest of the city. Vancouver’s neighborhood energy systems aim to reduce GHG emissions by 60% compared to traditional heating sources and supply affordable, reliable, and low carbon thermal energy to citizens. This project is expected to reduce emissions by 9,000 tonnes annually by 2020.

Cities have a very wide range of baseline years, from 1990 up until 2014. In order to facilitate consistent comparison across cities, all years have been rebaselined to 2010 for the purposes of this study. Further information on the methodology can be found at www.c40.org/research

Catalyzing City Action: The Compact of Mayors The Compact of Mayors is a groundbreaking effort to consolidate existing voluntary commitments that cities have made in advance of expectations around national level contributions to a global climate agreement. This report clearly shows that cities around the world are making commitments to reduce GHG emissions and are collaboratively working to reach their goals. The Compact of Mayors includes the following key components to enhance and standardize future efforts to aggregate the collective impact of cities: • Agreement by city networks – and then by their members – to undertake a transparent and supportive approach to reduce citylevel emissions, to reduce vulnerability and to enhance resilience to climate change, in a consistent and complementary manner to national level climate protection efforts through the Compact of Mayors. • The creation of a common method to uniformly measure GHG emissions through the Global Protocol for Community-scale Greenhouse Gas Emission Inventories.

• A common method to set cities’ GHG mitigation targets based on the new GHG Protocol Mitigation Goals Standard. • The creation of a central repository, the carbonn Climate Registry, which will enable the compilation of data through existing national, regional, and global city reporting platforms (such as CDP) in addition to future city network and reporting platform partners. For the first time, all city climate commitments and annual reporting will be publicly available in a single location. Companion research4 launched at the UN SecretaryGeneral’s Climate Summit in September 2014 from the Secretary-General’s Special Envoy for Cities and Climate Change shows the potential for even greater emissions reduction. Looking ahead, cities around the world must follow the example of the 228 cities identified in this research by enhancing their climate commitments and taking action. In the C40 network, for example, 15 cities have already committed to more than 70% reductions by 2050. 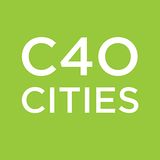 This research was conducted by C40 Cities Climate Leadership Group (C40) and Arup, in partnership with ICLEI-Local Governments for Sustainab...

This research was conducted by C40 Cities Climate Leadership Group (C40) and Arup, in partnership with ICLEI-Local Governments for Sustainab...