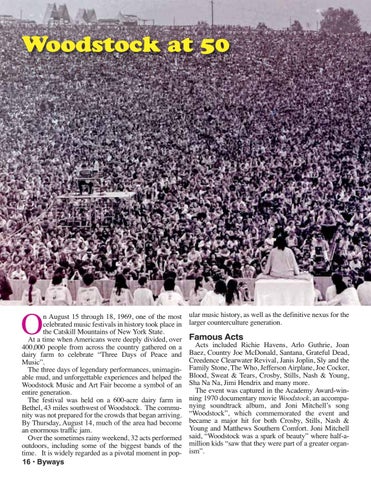 n August 15 through 18, 1969, one of the most celebrated music festivals in history took place in the Catskill Mountains of New York State. At a time when Americans were deeply divided, over 400,000 people from across the country gathered on a dairy farm to celebrate “Three Days of Peace and Music”. The three days of legendary performances, unimaginable mud, and unforgettable experiences and helped the Woodstock Music and Art Fair become a symbol of an entire generation. The festival was held on a 600-acre dairy farm in Bethel, 43 miles southwest of Woodstock. The community was not prepared for the crowds that began arriving. By Thursday, August 14, much of the area had become an enormous traffic jam. Over the sometimes rainy weekend, 32 acts performed outdoors, including some of the biggest bands of the time. It is widely regarded as a pivotal moment in pop16 • Byways

ular music history, as well as the definitive nexus for the larger counterculture generation. 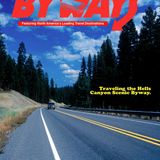