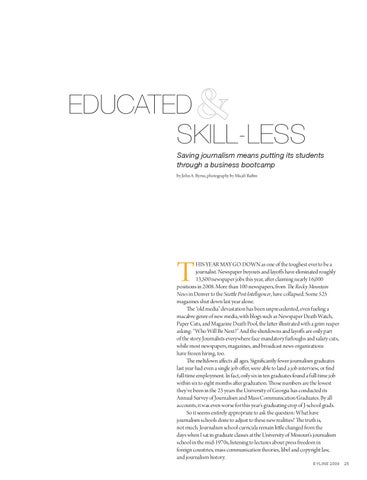 EDUCATED SKILL-LESS Saving journalism means putting its students through a business bootcamp by John A. Byrne, photography by Micah Rubin

HIS YEAR MAY GO DOWN as one of the toughest ever to be a journalist. Newspaper buyouts and layoffs have eliminated roughly 13,500 newspaper jobs this year, after claiming nearly 16,000 positions in 2008. More than 100 newspapers, from The Rocky Mountain News in Denver to the Seattle Post-Intelligencer, have collapsed. Some 525 magazines shut down last year alone. The “old media” devastation has been unprecedented, even fueling a macabre genre of new media, with blogs such as Newspaper Death Watch, Paper Cuts, and Magazine Death Pool, the latter illustrated with a grim reaper asking: “Who Will Be Next?” And the shutdowns and layoffs are only part of the story. Journalists everywhere face mandatory furloughs and salary cuts, while most newspapers, magazines, and broadcast news organizations have frozen hiring, too. The meltdown affects all ages. Significantly fewer journalism graduates last year had even a single job offer, were able to land a job interview, or find full-time employment. In fact, only six in ten graduates found a full-time job within six to eight months after graduation. Those numbers are the lowest they’ve been in the 23 years the University of Georgia has conducted its Annual Survey of Journalism and Mass Communication Graduates. By all accounts, it was even worse for this year’s graduating crop of J-school grads. So it seems entirely appropriate to ask the question: What have journalism schools done to adjust to these new realities? The truth is, not much. Journalism school curricula remain little changed from the days when I sat in graduate classes at the University of Missouri’s journalism school in the mid-1970s, listening to lectures about press freedom in foreign countries, mass communication theories, libel and copyright law, and journalism history.