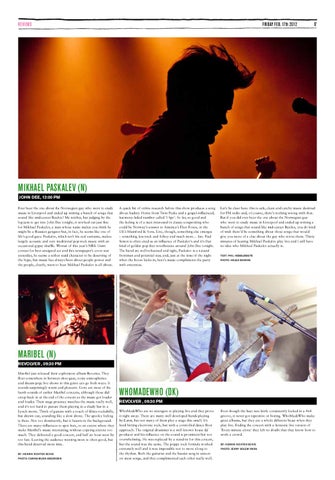 Mikhael Paskalev (n) John Dee, 12:00 PM Ever hear the one about the Norwegian guy who went to study music in Liverpool and ended up writing a bunch of songs that sound like mid-career Beatles? Me neither, but judging by the log-jam to get into John Dee tonight, it worked out just fine for Mikhael Paskalev, a man whose name makes you think he might be a Russian gangster but, in fact, he seems like one of life’s good guys. Paskalev, which isn’t his real surname, makes largely acoustic and very traditional pop-rock music with an occasional gypsy shuffle. Winner of this year’s NRK Urørt contest for best unsigned act and this newspaper’s cover star yesterday, he seems a rather staid character to be deserving of the hype, but music has always been about people power and the people, clearly, want to hear Mikhael Paskalev is all about.

A quick bit of online research before this show produces a song about Audrey Horne from Twin Peaks and a gospel-influenced, harmony-laded number called ‘I Spy’. So far, so good and the feeling is of a man interested in classic songwriting who could be Norway’s answer to America’s Fleet Foxes, or the UK’s Mumford &amp; Sons. Live, though, something else emerges – something less trad. and folksy and much more… fun. Paul Simon is often cited as an influence of Paskalev’s and it’s that kind of golden pop that reverberates around John Dee tonight. The band are well-rehearsed and tight, Paskalev is a natural frontman and potential star, and, just at the time of the night when the booze kicks in, here’s music compliments the party with sweetness.

Let’s be clear here: this is safe, clean and catchy music destined for FM radio and, of course, there’s nothing wrong with that. But if you did ever hear the one about the Norwegian guy who went to study music in Liverpool and ended up writing a bunch of songs that sound like mid-career Beatles, you do kind of wish there’d be something about those songs that would give you more of a clue about the guy who wrote them. Thirty minutes of hearing Mikhael Paskalev play live and I still have no idea who Mikhael Paskalev actually is. Text: Phil Hebblewaite Photo: Helge Brekke

Maribel (N) Revolver , 09:30 pm Maribel just released their sophomore album Reveries. They float somewhere in between shoe-gaze, noisy atmospherics and dream-pop; live shows in this genre can go both ways. It sounds surprisingly warm and pleasant. Gone are most of the harsh sounds of earlier Maribel concerts, although those did creep back in at the end of the concert as the music got louder and louder. Their stage presence matches the music really well, and it’s not hard to picture them playing in a shady bar in a Lynch movie. Think of guitars with a touch of fifties rockabilly, but drawn out, sounding like a slow drone. The spooky feeling is there. Not too dominantly, but it haunts in the background. There are many influences to spot here, to an extent where they make Maribel’s music interesting, without copying anyone too much. They delivered a good concert, and half an hour went by too fast. Leaving the audience wanting more is often good, but this band deserved more time. by: Henrik Richter Schie photo: Carina Musk-Andersen

WhoMadeWho (DK) Revolver , 09:30 pm WhoMadeWho are no strangers to playing live and they prove it right away. There are many well developed bands playing by:Larm, but not many of them play a stage this small. It’s hard hitting electronic rock, but with a controlled dance floor approach. The original drummer is a well known house dj/ producer and his influence on the sound is prominent but not overwhelming. He was replaced by a stand-in for this concert, but the sound was the same. The poppy rock formula worked extremely well and it was impossible not to move along to the rhythm. Both the guitarist and the bassist sang in unison on most songs, and they complimented each other really well.

Even though the beat was fairly consistently locked in a 4x4 groove, it never got repetitive or boring. WhoMadeWho make great albums, but they are a whole different beast when they play live. Ending the concert with a fantastic live version of ’Every minute alone’ they left no doubt that they know how to work a crowd. by: Henrik Richter Schie photo: Jenny Solem Vikra 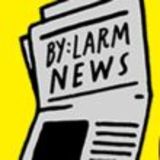