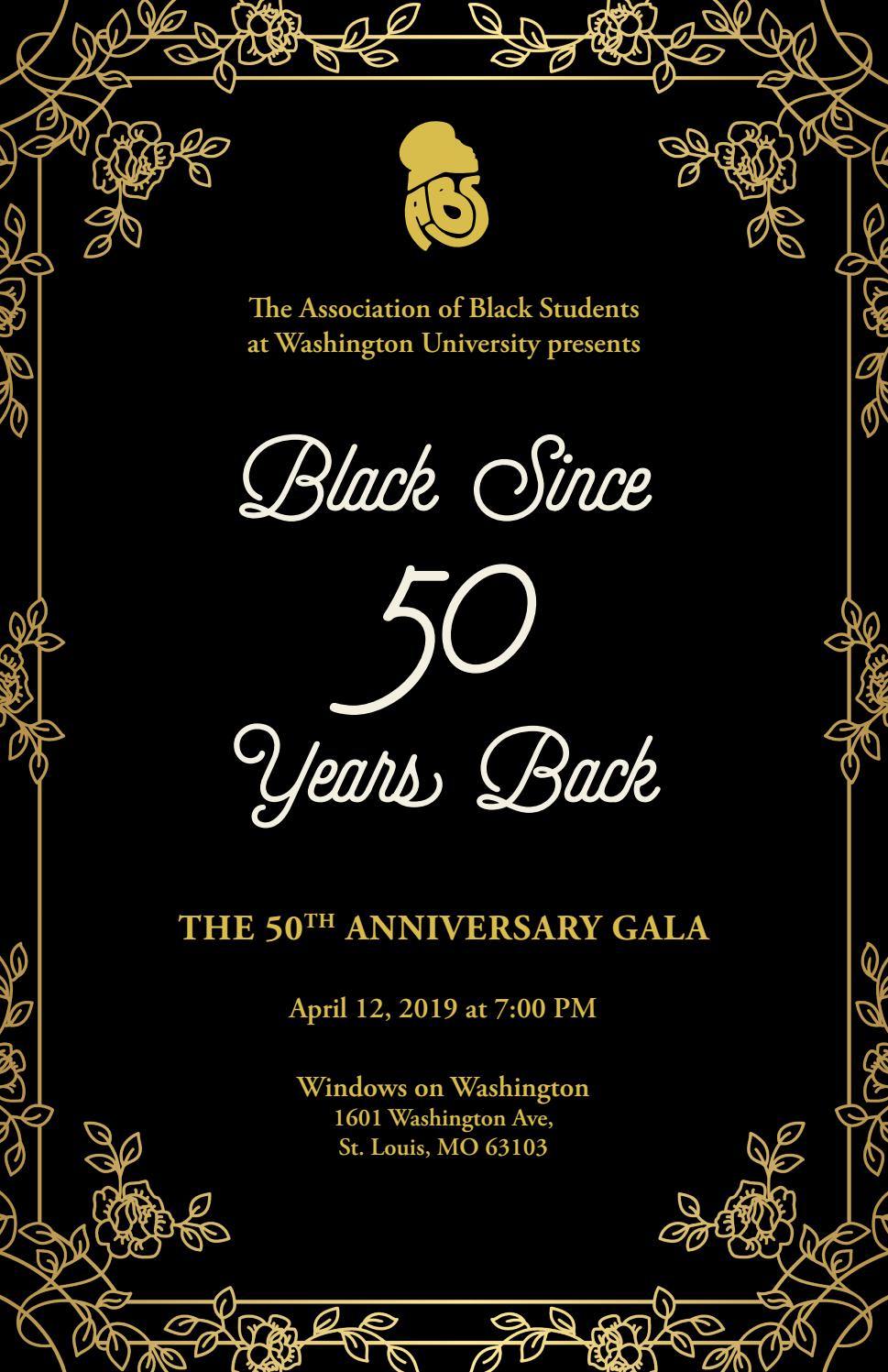 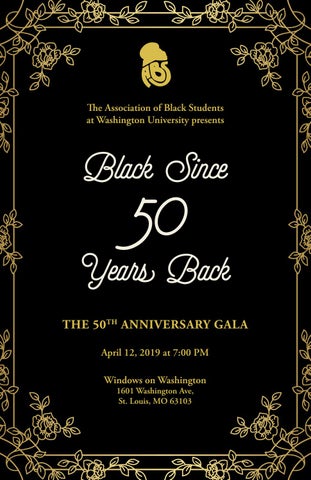 The Association of Black Students at Washington University presents

The Association of Black Students cordially welcomes you to its 50th Anniversary Gala.

Our Histo�y The Association of Black Collegians (ABC) was founded in 1967 to create community amongst and advocate for the needs of Black students to university administration. In 1968, founding members of the ABC occupied the accounts department in Brookings Hall to protest the unfair treatment of Black students on campus. The Black Manifesto was issued during the sit-in on December 11, 1968 to inform University Administration of the needs and demands of Black students. These demands included the creation of a Black Studies department, increased Black enrollment and financial aid, creation of Black residential and gathering spaces, and better treatment for Black staff on campus. In 1969, ABC became the Association of Black Students (ABS) and a Black studies program was created. In 1972, the second edition of the Black Manifesto was written, and it was recreated twice more by succeeding ABS members. Today, each entering class boasts Black student populations of over 10%, and the University has pledged to meet 100% of demonstrated need for students. African &amp; African American Studies is a fully recognized department of the university, dedicated to studying the African diaspora. This spring marks one year since we received word of the establishment of the Hamsini Living Learning Community, an on-campus residential home designed to give Black students a place to live in unity (“Hamsini” means “50” in Swahili, in honor of the 50th Anniversary of the Black Manifesto). In addition, the ABS Lounge is a gathering space reserved exclusively for use by Black students on campus. In the past 50 years, thousands of Black students have walked this campus and unknowingly left their mark on the University. Tonight, we are gathered here to celebrate the 50 years of Black students who have helped make ABS, and the experiences of Black students today, possible. We are honored that you are able to join us.

Speakers ROMMIE LOUDD Class of 1974 Mr. Rommie Loudd graduated from the College of Arts and Sciences at Washington University in St. Louis with a B.A. in Biology. He spent twenty-eight years as a software developer, retiring from AT&amp;T as a senior systems analyst in 2013. For the past forty plus years, he has been involved in Christian ministry, with a primary focus on assisting congregations in the implementation and training of Home Bible Study outreach.

SOLOMON BROWN, J.D. Class of 2014 Solomon Brown graduated from Washington University in 2014 with a BA in Political Science and International Business. He served as president of the Association of Black Students in 2013‒2014. Brown continued on to New York University School of Law, where he received his J.D. in 2017. Previously, he served as a law clerk to the Honorable Willie J. Epps Jr., U.S. Magistrate Judge for the Western District of Missouri. Currently, he works as a law clerk in the Capital Markets Group at Cadwalader, Wickersham &amp; Taft. Brown is also the founder and designer at Solomon Chancellor, a luxury leather goods company inspired by the U-Street Corridor in Washington, D.C.

DR. MICHELLE PURDY Class of 2001 Dr. Michelle A. Purdy earned her A.B. in educational studies and African and African-American studies and M.A. in history from Washington University in St. Louis, and Ph.D. in educational studies from Emory University. Purdy is an Assistant Professor of Education in Arts and Sciences at Washington University and Director of Undergraduate Educational Studies. She is also an affiliate faculty member with the Interdisciplinary Program in Urban Studies and the Center on Urban Research and Public Policy. With research, teaching, and service commitments to centering race, culture, and equity in education, her specialties include the history of U.S. education, the history of African American education, and the history of school desegregation. Her recently published book, Transforming the Elite: Black Students and the Desegregation of Private Schools (University of North Carolina Press) was recently awarded the New Scholar’s Award from the History Division of the American Educational Research Association (AERA). Purdy is also co-editor of Using Past as Prologue: Contemporary Perspectives: Contemporary Perspectives on African American Educational History and “African American Education, Civil Rights, and Black Power,” a special issue of The Journal of African American History. Recently, Purdy’s work has appeared in popular outlets such as The Washington Post and Teen Vogue.

Assistant Provost Director of the Office of Student Success Anthony Tillman is the director of the Office for Student Success that supports the Washington University strategic initiative to increase the number of undergraduates from low socio-economic backgrounds and first-generation college family backgrounds. Through the Deneb STARS Program, that is strategically designed to leverage the transformative impact of the Washington University educational experience for students in the program, Assistant Provost Tillman coordinates university programs and services to support the educational success of students from these demographics. Assistant Provost Tillman was born and raised in East Orange, New Jersey and attended Purdue University, located in West Lafayette, Indiana. A student from a low-income and first-generation background, Tillman earned a bachelor’s and master’s degree from Purdue and then, with his first appointment in higher education at Wilberforce University, embarked upon a thirty-plus year career in higher education. Anthony previously served nine years as the Assistant Provost for Student Success and Strategic Initiatives at Southern Methodist University located in Dallas, Texas.

A Message from the Incoming President NYA K. HARDAWAY

To those who led and grounded the Association of Black Students before us: thank you for your dedication and diligence. I am extremely grateful to witness and be part of this historical journey more than fifty years in the making. The creation this organization and establishing the grounds with which to hold our university accountable gave myself and others the opportunity to be drivers of change in our campus and larger St. Louis community. Inspired by a spirit of service and unity, I remember the values of responsibility, resilience, and restitution that many past and present members share today. Because of these values, ABS has played a crucial role in advancing Washington University institutionally in the best interest for all its students. As I recognize this responsibility of the organization, the determination of my predecessors, and my role as a leader of the student group, it is my aim to support our members academically, socially, and politically. While uplifting our students, it is imperative that we return to the original mission of the Association of Black Collegians: holding the university accountable for its treatment of and practices involving Black students and community members. I am eager to cultivate a space that not only celebrates the diverse beauty and brilliance of our Black student body but one that also seeks to dynamically transform Washington University into an institution that efficiently and effectively attends to needs of its marginalized and underrepresented students. I am thrilled to work with past, present, and future agents of change to preserve the legacy and the mission of ABS by encouraging action and unity for the next 50 and many more years to come.

We would like to extend a special thank-you to Assistant Provost Anthony Tillman for his unwavering support and advocacy throughout the planning of this event.

The Association of Black Students would like to extend a

Special Thanks To OFFICE OF THE PROVOST SCHOOL OF LAW OLIN BUSINESS SCHOOL COLLEGE OF ARTS &amp; SCIENCES STUDENT UNION

for making this event possible. 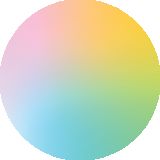 In April 2019, The Association of Black Students at Washington University in St. Louis held its 50th annual Gala. As a designer for Student Union PR, I met frequently with the 2018-2019 president, Jasmine Pickens, to make this program booklet. The Association of Black Collegians (ABC) was founded in 1967 to create community amongst and advocate for the needs of Black students to university administration. In 1968, founding members of the ABC occupied the accounts department in Brookings Hall to protest the unfair treatment of Black students on campus. The Black Manifesto was issued during the sit-in on December 11, 1968 to inform University Administration of the needs and demands of Black students. These demands included the creation of a Black Studies department, increased Black enrollment and financial aid, creation of Black residential and gathering spaces, and better treatment for Black staff on campus. In 1969, ABC became the Association of Black Students (ABS) and a Black studies program was created.