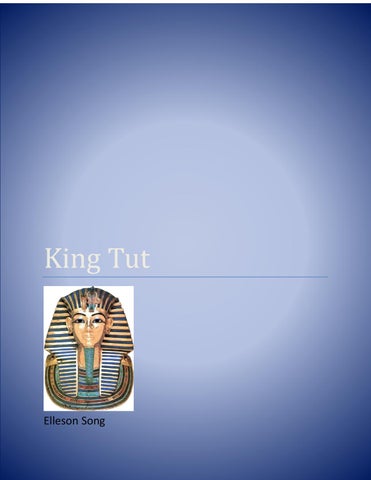 King Tut is one of the youngest pharaohs in Egypt and yet, he has done many great things. He gave scientists many eerie and interesting mysteries to solve, but thatâ&#x20AC;&#x2122;s why they find him so fascinating. In June 2005, pharaoh fever struck California. Suddenly, everyone wanted to go to the Los Angeles Museum of Art. Inside the museum, there stood a young king named Tutankhamun. His life was very intriguing. Tut became famous when Howard Carter first found his tomb. It took Howard many years to find it and when he was about to give up, he finally found what he was looking for. When Egypt opened up the hard work Howard did for all to see, the New York Times printed a letter from a person called Maria Corelli saying that she had book in Arabic that said a warning about a curse. Anyone who visited his tomb would be struck dead with an early death. And so it was. Today, King Tut may be the most famous pharaoh, but he was not a powerful ruler. When he was little, he grew up watching the construction of the great and holy city Amarna. Tut finally began his real life when he was still a prince with praying to the sun disk, Aten. He had to say a prayer to the God. The young prince studied astronomy and the science of the stars, read pyramid and coffin texts, and learned the wisdom Literature of the great Egyptians. The wisdom he learned was based on the need of other people. It taught: Today you may be rich, but tomorrow you may be Here is the board game of Senet. It poor, so it is your duty to be kind and caring. He soon is the most learned to read and write late Egyptian and master popular game algebra. In his free time for fun, he played the Egyptian board played in Egypt. game of Senet, listened to the music of the harp, lute, trumpet, and watched acrobats and colorful dancers. Tut practiced warfare with his bows, arrows, and lances. Soon, when the prince was four, he joined the royal ostrich and lion hunts and brought his pet dog with him. When he was older, he hunted for deer and wild ibex. Tut was only nine years old when his father passed away. All of a sudden, prince Tut was going to be King Tut! Two old men, Ay and Horemheb, held the real power to the throne. Tut was like a puppet waiting to be controlled in their hands. Tut went to Luxor to be crowned king in the temple of 2

Karnack. He changed his name to Tutankhamun because people thought it would match Amun, the place his father built. Tutankhaten was King Tut’s birth name. It meant “living image of Aten.” Tut moved away from the place his father had built and married Akhenaten’s daughter, Ankhesenamun. When Tut passed away, he only reigned for nine years. Ankhesenamun soon found herself as a widow. Ay had the boy king embalmed and placed in a tomb. All this was done in a rush. Nobody knows why it had to be done so fast. Nobody knows the exact day in 1343 B.C. when Tut came into the world. Who were Tut’s parents? What were they like? Scientists don’t know for sure. Some people are guessing that his father was likely to be pharaoh Amenhotep IV (the fourth) and his two wives Nefertiti and Kiya to be King Tut’s mother. But who was Amenhotep and his two wives? Well, here you go. When Amenhotep was pharaoh, he wanted everyone to believe in one god: Amun-Ra, the god of the sun. He married a beautiful queen. Her name was Nefertiti. Although she wasn’t born of royal birth, she looked very much like a queen. Nefertiti was a powerful woman. She was an important adviser for her husband. She backed him up when he was ready for changes. Amenhotep got rid of the priests who served other gods. After all the priests were gone, he changed his name to Akhenaten. His new name meant “servant of Aten.” Nefertiti changed her name too. Scientists believe that the name she changed to was Nefernefruaten which meant “fair is the goddess of Aten.” Tutankhamun had many half-sisters and half-brothers, but the most important of all were his half-sisters. They were the children of his father and his 1st most important wife, Nefertiti. Tut’s mother was known to be Kiya, Akhenaten’s other wife. Ay was the father of Queen Nefertiti and worshiped Aten. He truly loved and protected the young prince. Another part of Tut’s family was his grandmother, Queen Tiye and his great grandfather, King Thutmose IV. Tut especially loved his grandmother because she greatly protected and cared for him. Akhenaten also had a lot of characteristics Tut did. Among all the pharaohs, they think that Tut’s father was the strangest although they cannot assume that he may be Tut’s real father. The way Akhenaten’s head looked, it was oddly shaped. This may be one clue to his son’s skull and how it looked. Akhenaten’s

head was long and narrow. His hips were very large. Was a rare disease the cause? It’s still a mystery. It was time for a new pharaoh since Akhenaten passed away. Prince Tut would now become King Tut! Tut was pharaoh for nine years. Since he was still young, he had help and was controlled by an Tut wore a red and white double elder known as Ay. He wore tall crowns of the crown on him which meant that he was ruler of all Egypt. Back then, there were 2 pharaohs. One wore a white crown which meant that they were ruler of Upper Egypt and the other wore a red crown which meant that they ruled Lower Egypt.

pharaoh. He also wore a false beard that was strapped to his chin and carried around a crook and a flail to show power. A pharaoh is far more than a king. He was considered the son of the Gods. People worshiped him. Most people thought Tut was a good pharaoh. He was hardworking, kind, and restored most of the things that his father neglected or didn’t want to do. As a pharaoh, he restored the Opet Festival which was not allowed during Akhenaten’s reign. The Opet Festival celebrated ALL the gods with food and drink, which the Egyptians enjoyed. After Tut restored the Opet Festival, there was freedom of worship and Tut had made peace with both sides. At age 12, King Tut gave an order to the overseer of tombs of the Valley of the Kings for the reburial of his grandmother, Queen Tiye. Tut began building his own burial temple early on the west bank of the Nile near his family. He ordered to repair the holy sites and continued construction at the temple of Karnack. He married Ankesenamun in Amarna and named her his great royal wife and queen. As for Tut, Ay and Horemheb had to protect and watch over the young king. During his reign, a lot of battles took place between Egypt and the Nubians over territory and control of trade routes. The Hittite warriors from the north were threating Tut’s kingdom. Horemheb, the commander of this army, was constantly fighting Tut and the other Egyptians. Tut wasn’t quite ready for this, but he could manage it with his 4

skill of archery. He began to collect taxes to mount a great team against the Hittite army. But that never happened. At age 19, Tut suddenly died. No one knows for sure what happened. Many Egyptologists to this day are still trying to think about how Tut had died so early. In the year of 2005, some CAT scans were done on Tutankhamun’s body. They took pictures of him from head to toe and found out that there was an injury on his head, even when he was alive. Sadly, the test that they did couldn’t determine whether he was poisoned, murdered, or something else. When scientists scanned him, they also found Tut with a broken leg. If Tut was really poisoned, it wouldn’t have shown up on the scans anyway. Scientists think that the injury on his leg might’ve lead to death, but they cannot be sure. They think somebody wound him at war. Horemheb was the commander of a bad army and was constantly fighting Tut who was his enemy. This is one clue to Tut’s death. After all the scans were done, the leader of all this When Howard Carter found Tut’s decided to let Tut live in peace. Tut was buried in the tomb, found 2 small coffins containing 2 baby girls. It could Valley of the Kings. So many people wanted to see be possible that they were his his tomb that the Egyptians had to close it out. In children. months and years since the tomb opened, a number of strange occurrences were reported in newspapers. These included some deaths of the people who entered the tomb. King Tut’s tomb is cursed for the people who were by his tomb. It is said that it brings your death early. It’s strange to think that Tut got so famous only because of the items in his tomb. Everything in it is very important and beautiful. There were hundreds of preserved objects that were placed in King Tut’s tomb. Some things in the tomb were bracelets, rings, and collars. These were all his jewelry. There was clothing such as kilts, tunics, shirts, caps, and gloves. Furniture was also a big part of it such as 6 chairs, 12 stools, 6 beds, 69 storage chests and boxes. There were several wooden writing palettes, 46 bows, 427 arrows, 2 bronze swords, 2 gold daggers, 8 shields, 2 slings, and 6 full size chariots. The most important were food and drink such as bread, beef, poultry, spices, fruits, nuts, and honey. There was also wine but no wine in it. Explorers think that the wine evaporated somehow. An instrument was also discovered and it was known to be a sistrum. 5

Wow! King Tut is a truly fascinating pharaoh! He has done many more things than you think. He is thought of more after death than on land though. There is still so much to learn about him. (If you are really interested, go to the Los Angeles Museum of Art mentioned on one of the pages.)

Glossary CAT Scan – An X-ray scan which shows cross sectional images of a part of the body and formed through computerized axial tomography and shown on a computer screen. Crook – A tool used to shepherd sheep. Curse – An evil prayer to harming somebody or something as the result from an action. Egyptologist – A scholar who specializes in Ancient Egypt. Embalm – To preserve a dead body prior to burial. Flail – A tool used to separate grains from their husks. Lances – A steel-tipped spear carried by mounted knights or light cavalry. Overseer – To have or exercise the charge and oversight of. Pharaoh – The ruler and king of Egypt. Queen – The wife of a pharaoh. Senet – An Egyptian board game that requires stone pieces. Tomb – A grave or other place for burying a dead person. Valley of the Kings – A burial place for pharaohs. Warfare – Military operations between enemies.