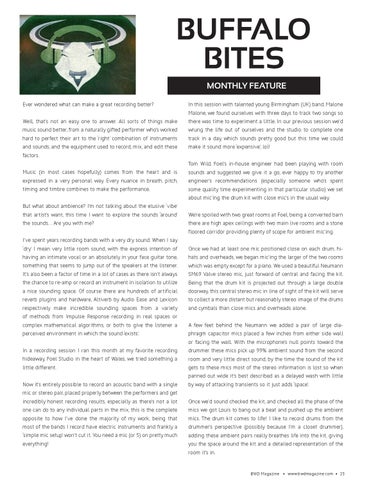 buffalo bites monthly feature Ever wondered what can make a great recording better?

In this session with talented young Birmingham (UK) band, Malone Malone, we found ourselves with three days to track two songs so

Well, that’s not an easy one to answer. All sorts of things make

there was time to experiment a little. In our previous session we’d

hard to perfect their art to the ‘right’ combination of instruments

track in a day, which sounds pretty good but this time we could

and sounds, and the equipment used to record, mix, and edit these

factors. Tom Wild, Foel’s in-house engineer had been playing with room Music (in most cases hopefully) comes from the heart and is

sounds and suggested we give it a go, ever happy to try another

expressed in a very personal way. Every nuance in breath, pitch,

timing and timbre combines to make the performance.

some quality time experimenting in that particular studio) we set about mic’ing the drum kit with close mic’s in the usual way.

But what about ambience? I’m not talking about the elusive ‘vibe’ that artist’s want, this time I want to explore the sounds ‘around’

We’re spoiled with two great rooms at Foel, being a converted barn

the sounds... Are you with me?

there are high apex ceilings with two main live rooms and a stone floored corridor providing plenty of scope for ambient mic’ing.

I’ve spent years recording bands with a very dry sound. When I say ‘dry’ I mean very little room sound, with the express intention of

Once we had at least one mic positioned close on each drum, hi-

having an intimate vocal or an absolutely in your face guitar tone,

hats and overheads, we began mic’ing the larger of the two rooms

something that seems to jump out of the speakers at the listener.

which was empty except for a piano. We used a beautiful Neumann

a nice sounding space. Of course there are hundreds of artificial

doorway, this central stereo mic in line of sight of the kit will serve

reverb plugins and hardware, Altiverb by Audio Ease and Lexicon

and cymbals than close mics and overheads alone.

of methods from Impulse Response recording in real spaces or complex mathematical algorithms, or both to give the listener a

perceived environment in which the sound ‘exists’.

phragm capacitor mics placed a few inches from either side wall or facing the wall. With the microphone’s null points toward the

drummer these mics pick up 99% ambient sound from the second

hideaway, Foel Studio in the heart of Wales, we tried something a

room and very little direct sound, by the time the sound of the kit

by way of attacking transients so it just adds ‘space’.

mic or stereo pair, placed properly between the performers and get incredibly honest recording results, especially as there’s not a lot

Once we’d sound checked the kit, and checked all the phase of the

one can do to any individual parts in the mix, this is the complete

opposite to how I’ve done the majority of my work, being that

mics. The drum kit comes to life! I like to record drums from the

you the space around the kit and a detailed representation of the room it’s in. 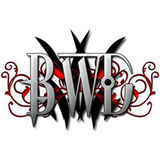 If we are to continue our evolution as human beings we must be mindful of where our race to the future is leading us. Mistakes set to rent a...

If we are to continue our evolution as human beings we must be mindful of where our race to the future is leading us. Mistakes set to rent a...