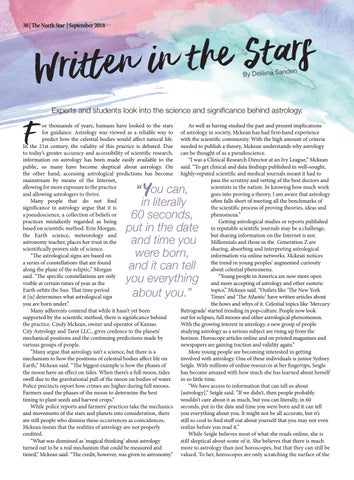 Experts and students look into the science and significance behind astrology.

or thousands of years, humans have looked to the stars for guidance. Astrology was viewed as a reliable way to predict how the celestial bodies would affect natural life. In the 21st century, the validity of this practice is debated. Due to today’s greater accuracy and accessibility of scientific research, information on astrology has been made easily available to the public, so many have become skeptical about astrology. On the other hand, accessing astrological predictions has become mainstream by means of the Internet, allowing for more exposure to the practice and allowing astrologers to thrive. Many people that do not find significance in astrology argue that it is a pseudoscience, a collection of beliefs or practices mistakenly regarded as being based on scientific method. Erin Morgan, the Earth science, meteorology and astronomy teacher, places her trust in the scientifically proven side of science. “The astrological signs are based on a series of constellations that are found along the plane of the ecliptic,” Morgan said. “The specific constellations are only visible at certain times of year as the Earth orbits the Sun. That time period it [is] determines what astrological sign you are born under.” Many adherents contend that while it hasn’t yet been supported by the scientific method, there is significance behind the practice. Cindy Mckean, owner and operator of Kansas City Astrology and Tarot LLC., gives credence to the planets’ mechanical positions and the continuing predictions made by various groups of people. “Many argue that astrology isn’t a science, but there is a mechanism to how the positions of celestial bodies affect life on Earth,” Mckean said. “The biggest example is how the phases of the moon have an effect on tides. When there’s a full moon, tides swell due to the gravitational pull of the moon on bodies of water. Police precincts report how crimes are higher during full moons. Farmers used the phases of the moon to determine the best timing to plant seeds and harvest crops.” While police reports and farmers’ practices take the mechanics and movements of the stars and planets into consideration, there are still people who dismiss these occurrences as coincidences. Mckean insists that the realities of astrology are not properly credited. “What was dismissed as ‘magical thinking’ about astrology turned out to be a real mechanism that could be measured and timed,” Mckean said. “The credit, however, was given to astronomy.”

As well as having studied the past and present implications of astrology in society, Mckean has had first-hand experience with the scientific community. With the high amount of criteria needed to publish a theory, Mckean understands why astrology can be thought of as a pseudoscience. “I was a Clinical Research Director at an Ivy League,” Mckean said. “To get clinical and data findings published in well-sought, highly-reputed scientific and medical journals meant it had to pass the scrutiny and vetting of the best doctors and scientists in the nation. In knowing how much work goes into proving a theory, I am aware that astrology often falls short of meeting all the benchmarks of the scientific process of proving theories, ideas and phenomena.” Getting astrological studies or reports published in reputable scientific journals may be a challenge, but sharing information on the Internet is not. Millennials and those in the Generation Z are sharing, absorbing and interpreting astrological information via online networks. Mckean notices the trend in young peoples’ augmented curiosity about celestial phenomena. “Young people in America are now more open and more accepting of astrology and other esoteric topics,” Mckean said. “Outlets like ‘The New York Times’ and ‘The Atlantic’ have written articles about the hows and whys of it. Celestial topics like ‘Mercury Retrograde’ started trending in pop-culture. People now look out for eclipses, full moons and other astrological phenomenon. With the growing interest in astrology, a new group of people studying astrology as a serious subject are rising up from the horizon. Horoscope articles online and on printed magazines and newspapers are gaining traction and validity again.” More young people are becoming interested in getting involved with astrology. One of these individuals is junior Sydney Seigle. With millions of online resources at her fingertips, Seigle has become amazed with how much she has learned about herself in so little time. “We have access to information that can tell us about [astrology],” Seigle said. ”If we didn’t, then people probably wouldn’t care about it as much, but you can literally, in 60 seconds, put in the date and time you were born and it can tell you everything about you. It might not be all accurate, but it’s still so cool to find stuff out about yourself that you may not even realize before you read it.” While Seigle believes most of what she reads online, she is still skeptical about some of it. She believes that there is much more to astrology than just horoscopes, but that they can still be valued. To her, horoscopes are only scratching the surface of the

in literally 60 seconds, put in the date and time you were born, and it can tell you everything about you.” 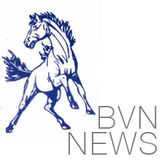 This is Issue 1 of Volume 33 of The North Star newspaper.

This is Issue 1 of Volume 33 of The North Star newspaper.