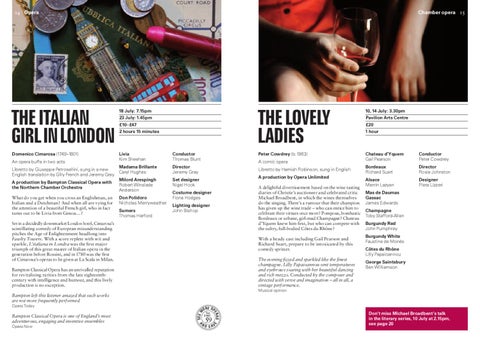 THE ITALIAN GIRL IN LONDON Domenico Cimarosa (1749–1801) An opera buffa in two acts Libretto by Giuseppe Petrosellini, sung in a new English translation by Gilly French and Jeremy Gray A production by Bampton Classical Opera with the Northern Chamber Orchestra What do you get when you cross an Englishman, an Italian and a Dutchman? And when all are vying for the attention of a beautiful French girl, who in fact turns out to be Livia from Genoa…?

Peter Cowdrey (b. 1963) A comic opera Libretto by Hamish Robinson, sung in English A production by Opera Unlimited A delightful divertissement based on the wine tasting diaries of Christie’s auctioneer and celebrated critic Michael Broadbent, in which the wines themselves do the singing. There’s a rumour that their champion has given up the wine trade – who can entice him to celebrate their virtues once more? Pompous, bombastic Bordeaux or urbane, girl-mad Champagne? Chateau d’Yquem knew him first, but who can compete with the sultry, full-bodied Côtes du Rhône?

Set in a decidedly downmarket London hotel, Cimarosa’s scintillating comedy of European misunderstanding pitches the Age of Enlightenment headlong into Fawlty Towers. With a score replete with wit and sparkle, L’italiana in Londra was the first major triumph of this great master of Italian opera in the generation before Rossini, and in 1780 was the first of Cimarosa’s operas to be given at La Scala in Milan.

With a heady cast including Gail Pearson and Richard Suart, prepare to be intoxicated by this comedy spritzer. The evening fizzed and sparkled like the finest champagne. Lilly Papaioannou sent temperatures and eyebrows soaring with her beautiful dancing and rich mezzo. Conducted by the composer and directed with verve and imagination – all in all, a vintage performance.

Bampton Classical Opera has an unrivalled reputation for revitalising rarities from the late eighteenthcentury with intelligence and humour, and this lively production is no exception.

Bampton left this listener amazed that such works are not more frequently performed Bampton Classical Opera is one of England’s most adventurous, engaging and inventive ensembles