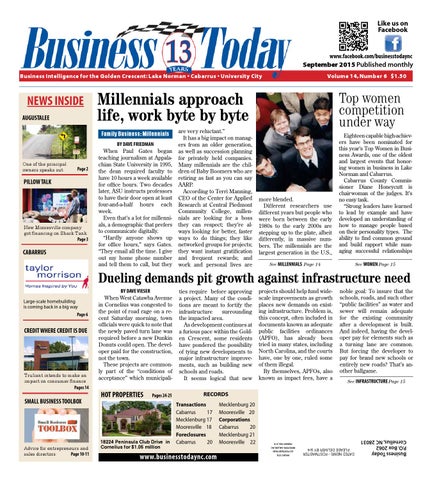 One of the principal owners speaks out

By Dave Friedman When Paul Gates began teaching journalism at Appalachian State University in 1995, the dean required faculty to have 10 hours a week available for office hours. Two decades later, ASU instructs professors to have their door open at least four-and-a-half hours each week. Even that’s a lot for millennials, a demographic that prefers to communicate digitally. “Hardly anyone shows up for office hours,” says Gates. “They email all the time. I give out my home phone number and tell them to call, but they

are very reluctant.” It has a big impact on managers from an older generation, as well as succession planning for privately held companies. Many millennials are the children of Baby Boomers who are retiring as fast as you can say AARP. According to Terri Manning, CEO of the Center for Applied Research at Central Piedmont Community College, millennials are looking for a boss they can respect; they’re always looking for better, faster ways to do things; they like networked groups for projects; they want instant gratification and frequent rewards; and work and personal lives are

more blended. Different researchers use different years but people who were born between the early 1980s to the early 2000s are stepping up to the plate, albeit differently, in massive numbers. The millennials are the largest generation in the U.S.,

Eighteen capable high-achievers have been nominated for this year’s Top Women in Business Awards, one of the oldest and largest events that honoring women in business in Lake Norman and Cabarrus. Cabarrus County Commissioner Diane Honeycutt is chairwoman of the judges. It’s no easy task. “Strong leaders have learned to lead by example and have developed an understanding of how to manage people based on their personality types. The ability to find common ground and build rapport while managing successful relationships

Truliant intends to make an impact on consumer finance Pages 14

noble goal: To insure that the schools, roads, and such other “public facilities” as water and sewer will remain adequate for the existing community after a development is built. And indeed, having the developer pay for elements such as a turning lane are common. But forcing the developer to pay for brand new schools or entirely new roads? That’s another ballgame. See INFRASTRUCTURE Page 15

Credit where credit is due

projects should help fund widescale improvements as growth places new demands on existing infrastructure. Problem is, this concept, often included in documents known as adequate public facilities ordinances (APFO), has already been tried in many states, including North Carolina, and the courts have, one by one, ruled some of them illegal. By themselves, APFOs, also known as impact fees, have a

ties require before approving a project. Many of the conditions are meant to fortify the infrastructure surrounding the impacted area. As development continues at a furious pace within the Golden Crescent, some residents have pondered the possibility of tying new developments to major infrastructure improvements, such as building new schools and roads. It seems logical that new

Large-scale homebuilding is coming back in a big way

By Dave Vieser When West Catawba Avenue in Cornelius was congested to the point of road rage on a recent Saturday morning, town officials were quick to note that the newly paved turn lane was required before a new Dunkin Donuts could open. The developer paid for the construction, not the town. These projects are commonly part of the “conditions of acceptance” which municipali-