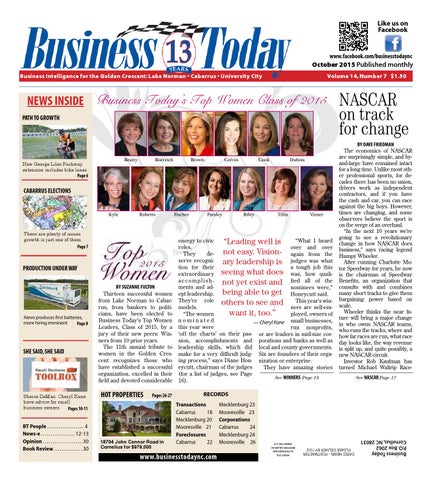 There are plenty of issues, growth is just one of them Page 7

She said, she said

By Suzanne Fulton Thirteen successful women from Lake Norman to Cabarrus, from bankers to politicians, have been elected to Business Today’s Top Women Leaders, Class of 2015, by a jury of their new peers: Winners from 10 prior years. The 11th annual tribute to women in the Golden Crescent recognizes those who have established a successful organization, excelled in their field and devoted considerable

energy to civic “What I heard “Leading well is roles. over and over not easy. Vision- again from the They deserve recogniary leadership is judges was what tion for their a tough job this extraordinar y seeing what does was, how qualia c c o m p l i s h - not yet exist and fied all of the ments and adnominees were,” being able to get Honeycutt said. ept leadership. They’re role others to see and This year’s winmodels. ners are self-emwant it, too.” “The women ployed, owners of nominated — Cheryl Kane small businesses, this year were run nonprofits, ‘off the charts’ on their pas- or are leaders in mid-size corsion, accomplishments and porations and banks as well as leadership skills, which did local and county governments. make for a very difficult judg- Six are founders of their orgaing process,” says Diane Hon- nization or enterprise. eycutt, chairman of the judges They have amazing stories (for a list of judges, see Page See WINNERS Page 14 16).

By Dave Friedman The economics of NASCAR are surprisingly simple, and byand-large have remained intact for a long time. Unlike most other professional sports, for decades there has been no union, drivers work as independent contractors, and if you have the cash and car, you can race against the big boys. However, times are changing, and some observers believe the sport is on the verge of an overhaul. “In the next 10 years we’re going to see a revolutionary change in how NASCAR does business,” says racing legend Humpy Wheeler. After running Charlotte Motor Speedway for years, he now is the chairman of Speedway Benefits, an organization that consults with and combines many short tracks to give them bargaining power based on scale. Wheeler thinks the near future will bring a major change in who owns NASCAR teams, who runs the tracks, where and how far races are run, what race day looks like, the way revenue is split up, and quite possibly, a new NASCAR circuit. Investor Rob Kaufman has turned Michael Waltrip Race-

NASCAR on track for change