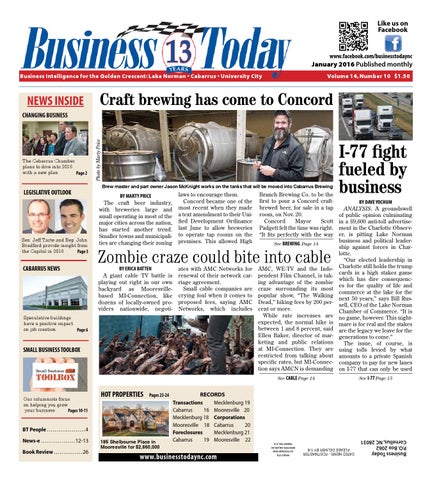 Craft brewing has come to Concord

By Marty Price The craft beer industry, with breweries large and small operating in most of the major cities across the nation, has started another trend. Smaller towns and municipalities are changing their zoning

laws to encourage them. Concord became one of the most recent when they made a text amendment to their Unified Development Ordinance last June to allow breweries to operate tap rooms on the premises. This allowed High

By Erica Batten A giant cable TV battle is playing out right in our own backyard as Mooresvillebased MI-Connection, like dozens of locally-owned providers nationwide, negoti-

ates with AMC Networks for renewal of their network carriage agreement. Small cable companies are cr ying foul when it comes to proposed fees, saying AMC Networks, which includes

AMC, WE-TV and the Independent Film Channel, is taking advantage of the zombie craze surrounding its most popular show, “The Walking Dead,” hiking fees by 200 percent or more. While rate increases are expected, the normal hike is between 1 and 8 percent, said Ellen Baker, director of marketing and public relations at MI-Connection. They are restricted from talking about specific rates, but MI-Connection says AMCN is demanding

By Dave Yochum ANALYSIS. A groundswell of public opinion culminating in a $9,600 anti-toll advertisement in the Charlotte Observer, is pitting Lake Norman business and political leadership against forces in Charlotte. “Our elected leadership in Charlotte still holds the trump cards in a high stakes game which has dire consequences for the quality of life and commerce at the lake for the next 50 years,” says Bill Russell, CEO of the Lake Norman Chamber of Commerce. “It is no game, however. This nightmare is for real and the stakes are the legacy we leave for the generations to come.” The issue, of course, is using tolls levied by what amounts to a private Spanish company to pay for new lanes on I-77 that can only be used

Zombie craze could bite into cable

Speculative buildings have a positive impact on job creation Page 6

Branch Brewing Co. to be the first to pour a Concord craftbrewed beer, for sale in a tap room, on Nov. 20. Concord Mayor Scott Padgett felt the time was right. “It fits perfectly with the way

I-77 fight fueled by business