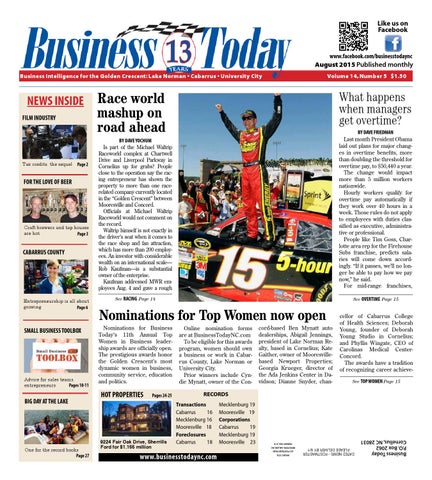 Race world mashup on road ahead

What happens when managers get overtime?

Is part of the Michael Waltrip Raceworld complex at Chartwell Drive and Liverpool Parkway in Cornelius up for grabs? People close to the operation say the racing entrepreneur has shown the property to more than one racerelated company currently located in the “Golden Crescent” between Mooresville and Concord. Officials at Michael Waltrip Raceworld would not comment on the record. Waltrip himself is not exactly in the driver’s seat when it comes to the race shop and fan attraction, which has more than 200 employees. An investor with considerable wealth on an international scale— Rob Kaufman—is a substantial owner of the enterprise. Kaufman addressed MWR employees Aug. 4 and gave a rough

By Dave Friedman Last month President Obama laid out plans for major changes in overtime benefits, more than doubling the threshold for overtime pay, to $50,440 a year. The change would impact more than 5 million workers nationwide. Hourly workers qualify for overtime pay automatically if they work over 40 hours in a week. Those rules do not apply to employees with duties classified as executive, administrative or professional. People like Tim Goss, Charlotte area rep for the Firehouse Subs franchise, predicts salaries will come down accordingly. “If it passes, we’ll no longer be able to pay how we pay now,” he said. For mid-range franchises,

For the love of beer

Entrepreneurship is all about growing Page 6

Big Day at the Lake

One for the record books Page 27

Online nomination forms are at BusinessTodayNC.com To be eligible for this awards program, women should own a business or work in Cabarrus County, Lake Norman or University City. Prior winners include Cyndie Mynatt, owner of the Con-