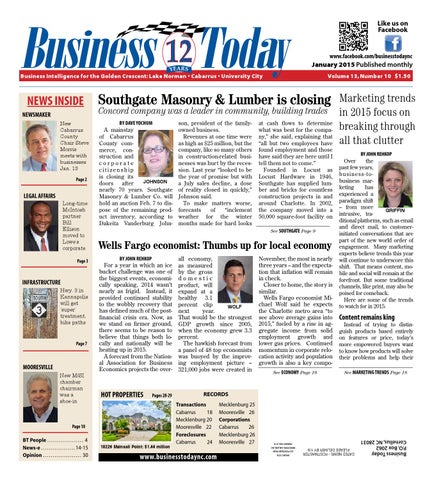 Infrastructure Hwy. 3 in Kannapolis will get ‘super’ treatment, bike paths

Marketing trends Concord company was a leader in community, building trades in 2015 focus on By Dave Yochum son, president of the family- at cash flows to determine what was best for the compa- breaking through owned business. A mainstay Revenues at one time were ny,” she said, explaining that of Cabarrus as high as $25 million, but the “all but two employees have all that clutter County commerce, construction and corporate citizenship is closing its Johnson doors after nearly 70 years. Southgate Masonry & Lumber Co. will hold an auction Feb. 7 to dispose of the remaining product inventory, according to Dakeita Vanderburg John-

found employment and those have said they are here until I tell them not to come.” Founded in Locust as Locust Hardware in 1946, Southgate has supplied lumber and bricks for countless construction projects in and around Charlotte. In 2002, the company moved into a 50,000 square-foot facility on See SOUTHGATE Page 9

Wells Fargo economist: Thumbs up for local economy By John Rehkop For a year in which an ice bucket challenge was one of the biggest events, economically speaking, 2014 wasn’t nearly as frigid. Instead, it provided continued stability to the wobbly recovery that has defined much of the postfinancial crisis era. Now, as we stand on firmer ground, there seems to be reason to believe that things both locally and nationally will be heating up in 2015. A forecast from the National Association for Business Economics projects the over-

company, like so many others in construction-related businesses was hurt by the recession. Last year “looked to be the year of promise but with a July sales decline, a dose of reality closed in quickly,” Johnson said. To make matters worse, forecasts of “inclement weather for the winter months made for hard looks

all economy, as measured by the gross domestic product, will expand at a healthy 3.1 percent clip WOLF next year. That would be the strongest GDP growth since 2005, when the economy grew 3.3 percent. The hawkish forecast from a panel of 48 top economists was buoyed by the improving employment picture – 321,000 jobs were created in

November, the most in nearly three years – and the expectation that inflation will remain in check. Closer to home, the story is similar. Wells Fargo economist Michael Wolf said he expects the Charlotte metro area “to see above average gains into 2015,” fueled by a rise in aggregate income from solid employment growth and lower gas prices. Continued momentum in corporate relocation activity and population growth is also a key compoSee ECONOMY Page 16

By John Rehkop Over the past few years, business-tobusiness marketing has experienced a paradigm shift – from more GRIFFIN intrusive, traditional platforms, such as email and direct mail, to customerinitiated conversations that are part of the new world order of engagement. Many marketing experts believe trends this year will continue to underscore this shift. That means content, mobile and social will remain at the forefront. But some traditional channels, like print, may also be poised for comeback. Here are some of the trends to watch for in 2015.

Instead of trying to distinguish products based entirely on features or price, today’s more empowered buyers want to know how products will solve their problems and help their See MARKETING TRENDS Page 16