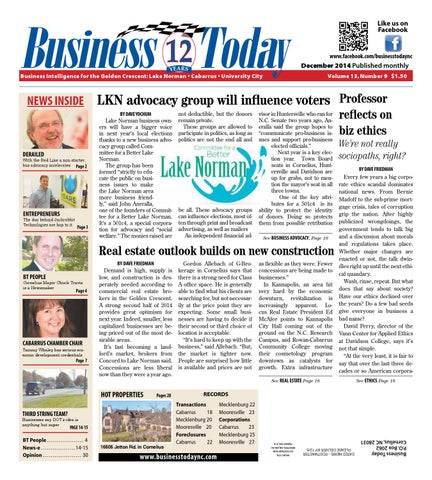 With the Red Line a non-starter, bus advocacy accelerates Page 2

The duo behind Jackrabbit Technologies are hop to it

LKN advocacy group will influence voters Professor By Dave Yochum Lake Norman business owners will have a bigger voice in next year’s local elections thanks to a new business advocacy group called Committee for a Better Lake Norman. The group has been formed “strictly to educate the public on business issues to make the Lake Norman area more business friendly,” said John Aneralla, one of the founders of Committee for a Better Lake Norman. It’s a 501c4, a special corporation for advocacy and “social welfare.” The monies raised are

not deductible, but the donors remain private. These groups are allowed to participate in politics, as long as politics are not the end all and

be all. These advocacy groups can influence elections, most often through print and broadcast advertising, as well as mailers An independent financial ad-

visor in Huntersville who ran for N.C. Senate two years ago, Aneralla said the group hopes to “communicate pro-business issues and support pro-business elected officials.” Next year is a key election year. Town Board seats in Cornelius, Huntersville and Davidson are up for grabs, not to mention the mayor’s seat in all three towns. One of the key attributes for a 501c4 is its ability to protect the identity of donors. Doing so protects them from possible retribution See BUSINESS ADVOCACY, Page 16

By Dave Friedman Demand is high, supply is low, and construction is desperately needed according to commercial real estate brokers in the Golden Crescent. A strong second half of 2014 provides great optimism for next year. Indeed, smaller, less capitalized businesses are being priced out of the most desirable areas. It’s fast becoming a landlord’s market, brokers from Concord to Lake Norman said. Concessions are less liberal now than they were a year ago.

Gordon Allebach of G-Brokerage in Cornelius says that there is a strong need for Class A office space. He is generally able to find what his clients are searching for, but not necessarily at the price point they are expecting. Some small businesses are having to decide if their second or third choice of location is acceptable. “It’s hard to keep up with the business,” said Allebach. “But, the market is tighter now. People are surprised how little is available and prices are not

as flexible as they were. Fewer concessions are being made to businesses.” In Kannapolis, an area hit very hard by the economic downturn, revitalization is increasingly apparent. Locus Real Estate President Ed McAfee points to Kannapolis City Hall coming out of the ground on the N.C. Research Campus, and Rowan-Cabarrus Community College moving their cosmetology program downtown as catalysts for growth. Extra infrastructure

By Dave Friedman Every few years a big corporate ethics scandal dominates national news. From Bernie Madoff to the sub-prime mortgage crisis, tales of corruption grip the nation. After highly publicized wrongdoings, the government tends to talk big and a discussion about morals and regulations takes place. Whether major changes are enacted or not, the talk dwindles right up until the next ethical quandary. Wash, rinse, repeat. But what does that say about society? Have our ethics declined over the years? Do a few bad seeds give everyone in business a bad name? David Perry, director of the Vann Center for Applied Ethics at Davidson College, says it’s not that simple. “At the very least, it is fair to say that over the last three decades or so American corpora-

Businesses say DOT’s idea is anything but super