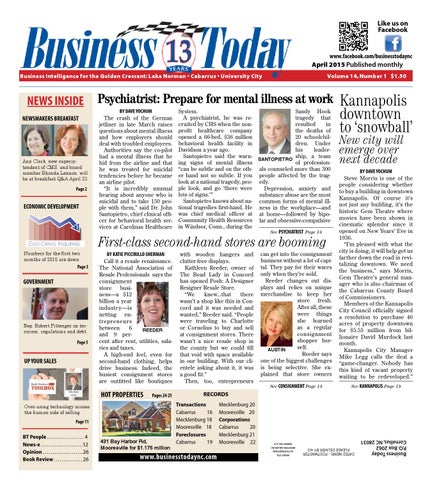 ? Eco-Devo Inquiries Numbers for the first two months of 2015 are down Page 3

By Dave Yochum The crash of the German jetliner in late March raises questions about mental illness and how employers should deal with troubled employees. Authorities say the co-pilot had a mental illness that he hid from the airline and that he was treated for suicidal tendencies before he became an airline pilot. “It is incredibly unusual hearing about anyone who is suicidal and to take 150 people with them,” said Dr. John Santopietro, chief clinical officer for behavioral health services at Carolinas Healthcare

Sandy Hook tragedy that resulted in the deaths of 20 schoolchildren. Under his leadership, a team SANTOPIETRO of professionals counseled more than 300 people affected by the tragedy. Depression, anxiety and substance abuse are the most common forms of mental illness in the workplace—and at home—followed by bipolar and obsessive-compulsive See PSYCHIATRIST Page 14

Over-using technology misses the human side of selling Page 11

System. A psychiatrist, he was recruited by CHS when the nonprofit healthcare company opened a 66-bed, $36 million behavioral health facility in Davidson a year ago. Santopietro said the warning signs of mental illness “can be subtle and on the other hand not so subtle. If you look at a national tragedy, people look, and go ‘there were lots of signs.’” Santopietro knows about national tragedies first-hand. He was chief medical officer at Community Health Resources in Windsor, Conn., during the

with wooden hangers and clutter-free displays. Kathleen Reeder, owner of The Bead Lady in Concord has opened Posh: A Designer Resigner Resale Store. “We knew...that there wasn’t a shop like this in Concord and it was needed and wanted,” Reeder said. “People were traveling to Charlotte or Cornelius to buy and sell at consignment stores. There wasn’t a nice resale shop in the county but we could fill that void with space available in our building. With our clientele asking about it, it was a good fit.” Then, too, entrepreneurs

can get into the consignment business without a lot of capital. They pay for their wares only when they’re sold. Reeder changes out displays and relies on unique merchandise to keep her store fresh. After all, these were things she learned as a regular consignment shopper herself. AUSTIN Reeder says one of the biggest challenges is being selective. She explained that store owners See CONSIGNMENT Page 14

Kannapolis downtown to ‘snowball’ New city will emerge over next decade

By Dave Yochum Steve Morris is one of the people considering whether to buy a building in downtown Kannapolis. Of course it’s not just any building, it’s the historic Gem Theatre where movies have been shown in cinematic splendor since it opened on New Years’ Eve in 1936. “I’m pleased with what the city is doing, it will help get us farther down the road in revitalizing downtown. We need the business,” says Morris, Gem Theatre’s general manager who is also chairman of the Cabarrus County Board of Commissioners. Members of the Kannapolis City Council officially signed a resolution to purchase 46 acres of property downtown for $5.55 million from billionaire David Murdock last month. Kannapolis City Manager Mike Legg calls the deal a “game-changer. Nobody has this kind of vacant property waiting to be redeveloped.” See KANNAPOLIS Page 14

Ann Clark, new superintendent of CMS, and board member Rhonda Lennon, will be at breakfast Q&A April 22