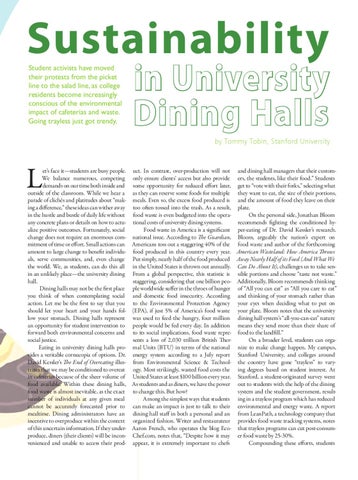 Student activists have moved their protests from the picket line to the salad line, as college residents become increasingly conscious of the environmental impact of cafeterias and waste. Going trayless just got trendy.

et’s face it—students are busy people. We balance numerous, competing demands on our time both inside and outside of the classroom. While we hear a parade of clichés and platitudes about “making a difference,” these ideas can wither away in the hustle and bustle of daily life without any concrete plans or details on how to actualize positive outcomes. Fortunately, social change does not require an enormous commitment of time or effort. Small actions can amount to large change to benefit individuals, serve communities, and, even change the world. We, as students, can do this all in an unlikely place—the university dining hall. Dining halls may not be the first place you think of when contemplating social action. Let me be the first to say that you should let your heart and your hands follow your stomach. Dining halls represent an opportunity for student intervention to forward both environmental concerns and social justice. Eating in university dining halls provides a veritable cornucopia of options. Dr. David Kessler’s The End of Overeating illustrates that we may be conditioned to overeat in cafeterias because of the sheer volume of food available. Within these dining halls, food waste is almost inevitable, as the exact number of individuals at any given meal cannot be accurately forecasted prior to mealtime. Dining administrators have an incentive to overproduce within the context of this uncertain information. If they underproduce, diners (their clients) will be inconvenienced and unable to access their prod-

uct. In contrast, over-production will not only ensure clients’ access but also provide some opportunity for reduced effort later, as they can reserve some foods for multiple meals. Even so, the excess food produced is too often tossed into the trash. As a result, food waste is even budgeted into the operational costs of university dining systems. Food waste in America is a significant national issue. According to The Guardian, Americans toss out a staggering 40% of the food produced in this country every year. Put simply, nearly half of the food produced in the United States is thrown out annually. From a global perspective, this statistic is staggering, considering that one billion people worldwide suffer in the throes of hunger and domestic food insecurity. According to the Environmental Protection Agency (EPA), if just 5% of America’s food waste was used to feed the hungry, four million people would be fed every day. In addition to its social implications, food waste represents a loss of 2,030 trillion British Thermal Units (BTU) in terms of the national energy system according to a July report from Environmental Science &amp; Technology. Most strikingly, wasted food costs the United States at least $100 billion every year. As students and as diners, we have the power to change this. But how? Among the simplest ways that students can make an impact is just to talk to their dining hall staff in both a personal and an organized fashion. Writer and restaurateur Aaron French, who operates the blog EcoChef.com, notes that, “Despite how it may appear, it is extremely important to chefs

and dining hall managers that their customers, the students, like their food.” Students get to “vote with their forks,” selecting what they want to eat, the size of their portions, and the amount of food they leave on their plate. On the personal side, Jonathan Bloom recommends fighting the conditioned hyper-eating of Dr. David Kessler’s research. Bloom, arguably the nation’s expert on food waste and author of the forthcoming American Wasteland: How America Throws Away Nearly Half of its Food (And What We Can Do About It), challenges us to take sensible portions and choose “taste not waste.” Additionally, Bloom recommends thinking of “All you can eat” as “All you care to eat” and thinking of your stomach rather than your eyes when deciding what to put on your plate. Bloom notes that the university dining hall system’s “all-you-can-eat” nature means they send more than their share of food to the landfill.” On a broader level, students can organize to make change happen. My campus, Stanford University, and colleges around the country have gone “trayless” to varying degrees based on student interest. At Stanford, a student-originated survey went out to students with the help of the dining system and the student government, resulting in a trayless program which has reduced environmental and energy waste. A report from LeanPath, a technology company that provides food waste tracking systems, notes that trayless programs can cut post-consumer food waste by 25-30%. Compounding these efforts, students FALL 2010 BUSINESS TODAY

The New Boardroom: Welcome to the Conversation!