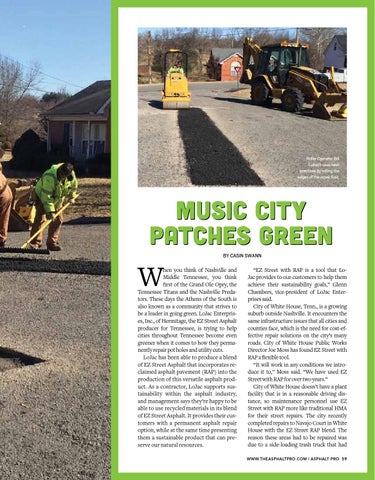 hen you think of Nashville and Middle Tennessee, you think first of the Grand Ole Opry, the Tennessee Titans and the Nashville Predators. These days the Athens of the South is also known as a community that strives to be a leader in going green. LoJac Enterprises, Inc., of Hermitage, the EZ Street Asphalt producer for Tennessee, is trying to help cities throughout Tennessee become even greener when it comes to how they permanently repair pot holes and utility cuts. LoJac has been able to produce a blend of EZ Street Asphalt that incorporates reclaimed asphalt pavement (RAP) into the production of this versatile asphalt product. As a contractor, LoJac supports sustainability within the asphalt industry, and management says they’re happy to be able to use recycled materials in its blend of EZ Street Asphalt. It provides their customers with a permanent asphalt repair option, while at the same time presenting them a sustainable product that can preserve our natural resources.

“EZ Street with RAP is a tool that LoJac provides to our customers to help them achieve their sustainability goals,” Glenn Chambers, vice-president of LoJac Enterprises said. City of White House, Tenn., is a growing suburb outside Nashville. It encounters the same infrastructure issues that all cities and counties face, which is the need for cost-effective repair solutions on the city’s many roads. City of White House Public Works Director Joe Moss has found EZ Street with RAP a flexible tool. “It will work in any conditions we introduce it to,” Moss said. “We have used EZ Street with RAP for over two years.” City of White House doesn’t have a plant facility that is in a reasonable driving distance, so maintenance personnel use EZ Street with RAP more like traditional HMA for their street repairs. The city recently completed repairs to Navajo Court in White House with the EZ Street RAP blend. The reason these areas had to be repaired was due to a side-loading trash truck that had www.theasphaltpro.com | ASPHALT PRO 59