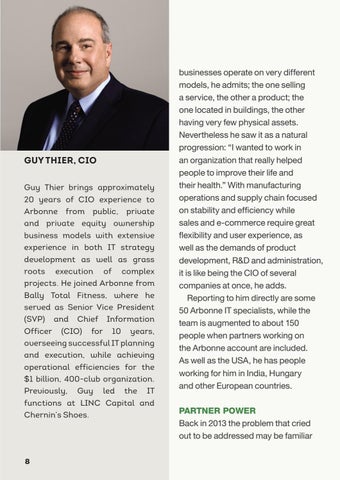 Guy Thier, CIO Guy Thier brings approximately 20 years of CIO experience to Arbonne from public, private and private equity ownership business models with extensive experience in both IT strategy development as well as grass roots execution of complex projects. He joined Arbonne from Bally Total Fitness, where he served as Senior Vice President (SVP) and Chief Information Officer (CIO) for 10 years, overseeing successful IT planning and execution, while achieving operational efficiencies for the $1 billion, 400-club organization. Previously, Guy led the IT functions at LINC Capital and Chernin’s Shoes.

businesses operate on very different models, he admits; the one selling a service, the other a product; the one located in buildings, the other having very few physical assets. Nevertheless he saw it as a natural progression: “I wanted to work in an organization that really helped people to improve their life and their health.” With manufacturing operations and supply chain focused on stability and efficiency while sales and e-commerce require great flexibility and user experience, as well as the demands of product development, R&D and administration, it is like being the CIO of several companies at once, he adds. Reporting to him directly are some 50 Arbonne IT specialists, while the team is augmented to about 150 people when partners working on the Arbonne account are included. As well as the USA, he has people working for him in India, Hungary and other European countries. PARTNER POWER Back in 2013 the problem that cried out to be addressed may be familiar