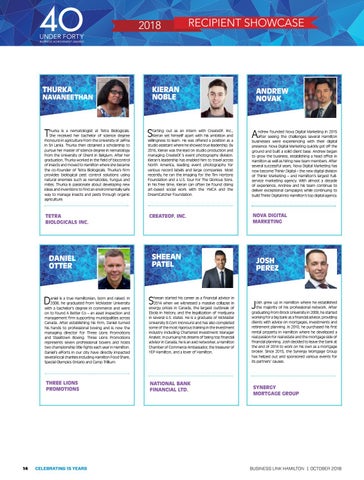 hurka is a nematologist at Tetra Biologicals. She received her bachelor of science degree (honours) in agriculture from the University of Jaffna in Sri Lanka. Thurka then obtained a scholarship to pursue her master of science degree in nematology from the University of Ghent in Belgium. After her graduation, Thurka worked in the field of biocontrol of insects and moved to Hamilton where she became the co-founder of Tetra Biologicals. Thurka’s firm provides biological pest control solutions using natural enemies such as nematodes, fungus and mites. Thurka is passionate about developing new ideas and inventions to find an environmentally safe way to manage insects and pests through organic agriculture.

aniel is a true Hamiltonian, born and raised. In 2008, he graduated from McMaster University with a bachelor’s degree in commerce and went on to found A Better Co – an asset inspection and management firm supporting municipalities across Canada. After establishing his firm, Daniel turned his hands to professional boxing and is now the managing director for Three Lions Promotions and Steeltown Boxing. Three Lions Promotions represents seven professional boxers and hosts two championship title fights each year in Hamilton. Daniel’s efforts in our city have directly impacted several local charities including Hamilton Food Share, Special Olympics Ontario and Camp Trillium.

tarting out as an intern with CreateOf. Inc., Kieran set himself apart with his ambition and willingness to learn. He was offered a position as a studio assistant where he showed true leadership. By 2016, Kieran was the lead on studio production and managing CreateOf.’s event photography division. Kieran’s leadership has enabled him to travel across North America, leading event photography for various record labels and large companies. Most recently, he ran the imaging for the Tim Hortons Foundation and a U.S. tour for The Glorious Sons. In his free time, Kieran can often be found doing art-based social work with the YMCA and the DreamCatcher Foundation.

heean started his career as a financial advisor in 2014 when we witnessed a massive collapse in energy prices in Canada, the largest outbreak of Ebola in history, and the legalization of marijuana in several U.S. states. He is a graduate of McMaster University B.Com (Honours) and has also completed some of the most rigorous training in the investment industry including Chartered Investment Manager Analyst. In pursuing his dreams of being top financial advisor in Canada, he is an avid networker, a Hamilton Chamber of Commerce Ambassador, the treasurer of YEP Hamilton, and a lover of Hamilton.

ndrew founded Nova Digital Marketing in 2015 after seeing the challenges several Hamilton businesses were experiencing with their digital presence. Nova Digital Marketing quickly got off the ground and built a solid client base. Andrew began to grow the business, establishing a head office in Hamilton as well as hiring new team members. After several successful years, Nova Digital Marketing has now become Thinkr Digital – the new digital division of Thinkr Marketing – and Hamilton’s largest fullservice marketing agency. With almost a decade of experience, Andrew and his team continue to deliver exceptional campaigns while continuing to build Thinkr Digital into Hamilton’s top digital agency.

osh grew up in Hamilton where he established the majority of his professional network. After graduating from Brock University in 2009, he started working for a big bank as a financial advisor, providing clients with advice on mortgages, investments and retirement planning. In 2010, he purchased his first rental property in Hamilton where he developed a real passion for real estate and the mortgage side of financial planning. Josh decided to leave the bank at the end of 2014 to work on his own as a mortgage broker. Since 2015, the Synergy Mortgage Group has helped out and sponsored various events for its partners’ causes. 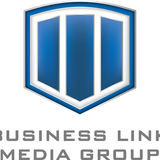