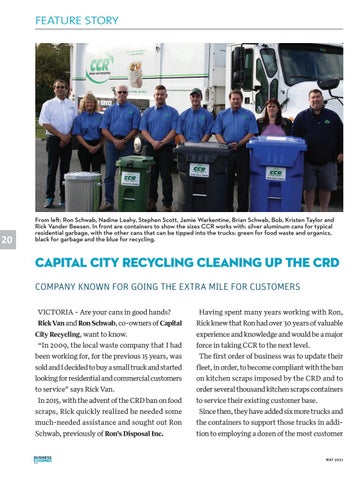 From left: Ron Schwab, Nadine Leahy, Stephen Scott, Jamie Warkentine, Brian Schwab, Bob, Kristen Taylor and Rick Vander Beesen. In front are containers to show the sizes CCR works with: silver aluminum cans for typical residential garbage, with the other cans that can be tipped into the trucks: green for food waste and organics, black for garbage and the blue for recycling.

CAPITAL CITY RECYCLING CLEANING UP THE CRD COMPANY KNOWN FOR GOING THE EXTRA MILE FOR CUSTOMERS VICTORIA - Are your cans in good hands? Rick Van and Ron Schwab, co-owners of Capital City Recycling, want to know. “In 2009, the local waste company that I had been working for, for the previous 15 years, was sold and I decided to buy a small truck and started looking for residential and commercial customers to service” says Rick Van. In 2015, with the advent of the CRD ban on food scraps, Rick quickly realized he needed some much-needed assistance and sought out Ron Schwab, previously of Ron’s Disposal Inc.

Having spent many years working with Ron, Rick knew that Ron had over 30 years of valuable experience and knowledge and would be a major force in taking CCR to the next level. The first order of business was to update their fleet, in order, to become compliant with the ban on kitchen scraps imposed by the CRD and to order several thousand kitchen scraps containers to service their existing customer base. Since then, they have added six more trucks and the containers to support those trucks in addition to employing a dozen of the most customer