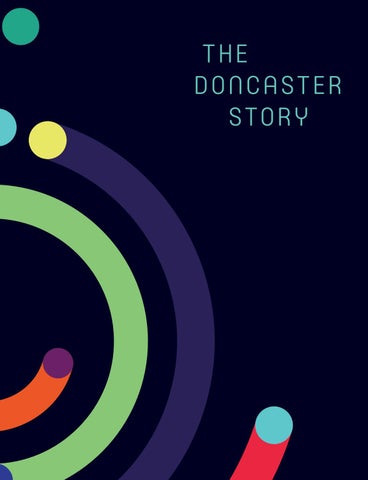 Doncaster has traditionally been a prosperous area due to its

ST RAT EGIC LOCATION which has been important since Roman times. It sits on the River Don, has the M1, A1 and M18 nearby, is on the East Coast Mainline, has Doncaster Sheffield Robin Hood Airport just a few miles away and is within easy reach of Sheffield, Lincoln, Leeds and the Humber ports.

The town developed as a strong industrial centre in the 19th and 20th centuries based on coal and communications which saw many people arrive to grow its population. Coal was at the heart

as it used the River Don and Don navigation to move the ‘black gold’ to the steel centres of Sheffield, Rotherham and Scunthorpe. Alongside coal came other industries such as glass production, wire rope making and the town became a base for locomotive and carriage building with the Mallard and Flying Scotsman being perhaps the most famous engines made there.

From an economic perspective Doncaster has built on its DNA as it creates a new economy with a number of major, high-tech logistics businesses taking advantage of its proximity to urban centres and fantastic road, rail and air connectivity and it is embracing being the The demise of coal mining in the late 20th century had a knock on effect for other industries, employment and confidence. In recent times Doncaster has been re-inventing itself with regeneration schemes; Lakeside which is home to housing, businesses, leisure facilities and Doncaster Rovers; the Frenchgate shopping

rail businesses and Doncaster International iPort as a vital cultural quarter; and is about to develop a European Tour standard intermodal terminal. golf course.

We’ve taken a long hard look at our town and area so we know what’s special about Doncaster and can be clear what we need to focus on in order to be thought about and chosen. We’re clear on why

and how we are different.

Our new story explains what Doncaster has to offer, captures the essence of the area and will be what puts us ‘on the map’ for all the right reasons. It is unlikely that the words we use to represent this new thinking will be seen by our ‘customers’ – they’re not marketing slogans but instead describe the essence of the

They will determine how we develop our offer through the way we communicate, what we build, the environment we create and the way we behave.

Whilst some elements describe what we have and the way we are now, they also reflect what we want and need to be in the future; so our approach is both

in a reality that can be seen today.

T HE T HEMES OF T HE DONCAST ER STORY

T HE BUSINESS OF CONNECTIVIT Y At a time of larger economic areas where places are coming together to create critical mass by seeing how they complement each other Doncaster has a fantastic opportunity to leverage and exploit its location and relationships as it has done for hundreds of years.

Clearly, as it looks west it has a close and important relationship with Sheffield, but Manchester must also be on the radar given its pivotal role in the Northern Powerhouse and the Peak District adds that beautiful

‘QUAL IT Y OF L IF E’ experience; to the south, London is just 90 minutes away and just down the road is the growing city of Lincoln; to the north is the financial services city of Leeds, and given the location driven, logistical role Doncaster is developing, the Humber Ports must be a vital link.

‘ENERGISING T HE EAST ’ in what is a polycentric economic geography.

Itâ&#x20AC;&#x2122;s also vital that Doncaster makes the most of the expansion of the airport as the European destinations it links with are as near if not nearer than London and offer a whole new market whilst also often acting as international hubs.

MAJOR BRANDS such as Amazon, Next, Tesco, Ikea and B&Q choosing the area to locate their state of the art enterprise centres. This isnâ&#x20AC;&#x2122;t basic distribution with sheds and low skilled jobs - this is high end, integrated, IT driven logistics and sophisticated supply chain services and solutions.

Importantly, Doncaster is also looking to ensure its successful surrounding attractions such as the

L EISURE L EADERS Doncaster is at the heart of a significant and growing cultural and visitor offer that will further develop with a focus on quality, family related activity. An example of this has been the highly successful staging of the Tour de Yorkshire which saw phenomenal crowds, enthusiasm and excitement. Lakeside has the potential to build on its success in holding major jet-ski events with international standard action and the consequent media coverage that will bring.

UK ’S NUMBE R ONE walk through wildlife adventure. Rossington Hall is being developed into a

destination and tournament venue with a view to it holding European events in the next 5 years.

Doncaster football has benefitted from a new community sports

flat race which is the oldest of Britain’s classics. In fact the town

stadium and also has a very successful ladies team, the Belles.

different sports in the years to come.

The town also benefits from being located with

BEAU TIF UL COUNT RYSIDE on the doorstep including the Peak District National Park, and this is a tremendous resource for walking, cycling and holidaying. There are a number of historic houses in the area such as Cusworth Hall and many attractive villages and towns to visit and enjoy such as Bawtry.

In the heart of Doncaster

CAST ARTS VENUE has been opened as a ÂŁ22 million

with a significant auditorium, different studios and is the anchor for a new cultural and civic high quality centre. The town has also had a popular and award winning market for hundreds of years and it is one of the largest in the north receiving praise from celebrity chefs and loyal customers alike.

BEACON FOR SKIL LS AND ASPIRATION Doncaster is re-inventing itself and whilst some of that is based on what it has been known for and in its DNA, it is still challenging, takes time and the hardest part is taking the people of the area on that journey. The town is seeking to deliver on its promises, demonstrate by â&#x20AC;&#x2DC;doingâ&#x20AC;&#x2122; and engaging differently wherever it can; delivering the new link road to the airport, creating iPort, winning the National High Speed Rail College and holding a stage of the Tour de Yorkshire are all testament to that.

No amount of slick marketing will make people become aspirational, they have to see and feel ‘change’, benefit from what it brings and want to be part of it. All places have their time and there’s no doubt that Doncaster is

‘RIDING T HE WAVE’. There is a national need and desire to improve skills (linked to aspiration) especially amongst young people, yet most places haven’t got past that being an unfathomable challenge; Doncaster might not have all the answers but it does have a plan and successes to point to.

Whilst Doncaster might not have a university (yet) it is surrounded

ST RONG UNIVERSIT Y ENVIRONMENT by and part of a

Doncaster is in the final stages of establishing an Advanced Engineering and Digital Design University Technical College. This would have a focus on advanced manufacturing, rail,

to these most significant areas of employment growth locally,

and the University of Huddersfield.

Doncaster was also successful in winning the National High Speed Rail College to train young people who will deliver HS2 and future rail infrastructure projects and the first students will walk through the doors in September 2017. Doncaster was successful because of the excellent links

To make sure that Doncaster is doing everything it can to

align education, skills and employment. This has the aim of raising

the initiative will usher in a new generation of engineering

attainment levels and ensuring that young people have the right

and manufacturing across the area.

skills for the new jobs being created in the area.

NORT HERN RACING COL L EGE which is the northern centre of excellence for training in the horse racing industry.

When it comes to learning, skills, growing young people and growing the economy Doncaster has tangible ambition but most importantly it has a story (and successes) to tell about how itâ&#x20AC;&#x2122;s going to get there.

surrounding area that sits above and alongside the themes. It projects what the place is about, what it stands for and what matters. This is not a strap line or marketing message it is a ‘strategic signature’ for Doncaster.

Many places have the aspiration to be a city but for most this is about being given the status which in reality changes nothing. Doncaster acts like a

CIT Y has the public and private sector leadership of a city,

has the confidence and ambition of a city and seeks to influence like a city.

Doncaster has got some challenges but far less than most and one of the biggest is to recognise and celebrate its successes, its businesses, its public sector, its people. It has a great story to tell of thinking bigger and wider, of taking risks, creating a

‘PL ACE L ED’ approach for what it does, of truly engaging and involving business, of a pro-active approach to growing young people, of putting

at the heart of what it does and of growing the economy.