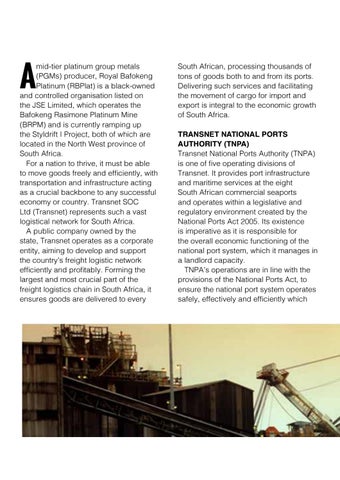 mid-tier platinum group metals (PGMs) producer, Royal Bafokeng Platinum (RBPlat) is a black-owned and controlled organisation listed on the JSE Limited, which operates the Bafokeng Rasimone Platinum Mine (BRPM) and is currently ramping up the Styldrift I Project, both of which are located in the North West province of South Africa. For a nation to thrive, it must be able to move goods freely and efficiently, with transportation and infrastructure acting as a crucial backbone to any successful economy or country. Transnet SOC Ltd (Transnet) represents such a vast logistical network for South Africa. A public company owned by the state, Transnet operates as a corporate entity, aiming to develop and support the countryâ&#x20AC;&#x2122;s freight logistic network efficiently and profitably. Forming the largest and most crucial part of the freight logistics chain in South Africa, it ensures goods are delivered to every

South African, processing thousands of tons of goods both to and from its ports. Delivering such services and facilitating the movement of cargo for import and export is integral to the economic growth of South Africa. TRANSNET NATIONAL PORTS AUTHORITY (TNPA) Transnet National Ports Authority (TNPA) is one of five operating divisions of Transnet. It provides port infrastructure and maritime services at the eight South African commercial seaports and operates within a legislative and regulatory environment created by the National Ports Act 2005. Its existence is imperative as it is responsible for the overall economic functioning of the national port system, which it manages in a landlord capacity. TNPAâ&#x20AC;&#x2122;s operations are in line with the provisions of the National Ports Act, to ensure the national port system operates safely, effectively and efficiently which