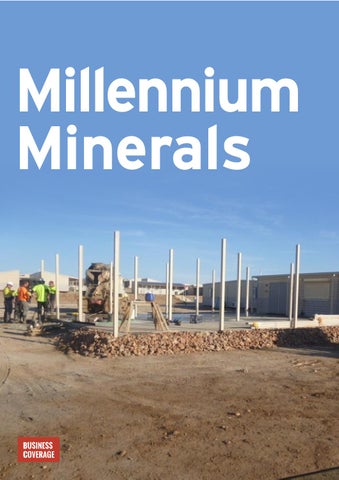 MillenniuM Building on a successful year for gold

2015 - A SEMINAL YEAR Millennium Minerals’ business plan is to operate at a profitable level, repay debt promptly and re-invest surplus funds in future organic and inorganic growth. The longer term aim is to achieve mid-tier status within the Australian resource industry over the next five years. In many ways, 2015 was a seminal year for Millennium Minerals which signalled a very healthy turnaround from the previous year. In 2014, the company’s results were blighted by poor mine performance and cash flow, ending the year with a high level of debt that was difficult to service. Operations produced full year gold output of just over 91,400 ounces, compared to 2014’s production of around 74,300 ounces. Independent Non‐Executive Chairman, Richard Procter, puts this improved performance down to the “methodical implementation of the many steps necessary to rectify the various challenges facing the Company, including receiving vital support from our major shareholder, IMC, and management changes such as Glenn taking over as CEO”. The Glenn Procter refers to in his Chairman’s Letter in the 2015 annual report is of course Glenn Dovaston, who took over the role of Chief Executive. There was a raft of significant technical and operational changes being made at the end of 2014 and into 2015, and Millennium are reaping the results. NULLAGINE GOLD HISTORY The Nullagine Gold Project in WA’s East Pilbara region covers approximately 640 km2 tenements within one of the oldest and least explored goldfields in WA.

Gold was first discovered at Nullagine in the late 1890s, which back then resulted in a gold rush and considerable interest on the London Stock Exchange. A decade later, there were several workings and treatment plants spread around the Mosquito Creek belt. Western Australian Department of Mines records show that by the end of 1937, 47,380 tonnes ore returning 78,108 ounces of gold and 8,904 ounces of silver from alluvial sources and dollied specimens was produced. Millennium first became involved in May 2001, when it acquired a significant package of tenements. All land involved in the project (except the accommodation facility located in Nullagine), is subject to native title. These individual native title mining agreements have been signed with the Njamal and Palyku people. Project construction was completed in September 2012 with first gold poured that same month.The mineâ&amp;#x20AC;&amp;#x2122;s design and scheduling is driven to maximise production for an annual estimated production of around 72,000 â&amp;#x20AC;&amp;#x201C; 75,000 ounces of gold. The 1.5 Mtpa nameplate CIL ore treatment plant is located adjacent to the largest deposit of the Nullagine gold mining operations. Ore is mined and delivered from several open pits to a 150,000 tonne capacity stockpile where a front end loader re-handles the ore into a ROM (run-of-mine) crusher feed bin. Separate smaller stockpiles account for varying material hardness and grade, allowing for blending and process optimisation. Millennium continues to be active within the local community, helping police, health services, schools and the shire generally.

It aims to find new ways to contribute positively and proactively to the Nullagine and close surrounding communities, including providing employment opportunities (both permanent and short term). OPERATIONAL MOMENTUM “The latter part of 2015 provided evidence that the faith we had in our flagship project was beginning to be realised,” says Procter. “By the end of the year the Nullagine project had good operational momentum. The turnaround was remarkable.” Early exploration results, gold production and financial performance improvements during the year enabled the Company to enter the capital markets in December and raise $21 million. “This raising (to use the funds to accelerate eliminating debt and initiate an aggressive brownfields exploration program on our highly prospective tenements), was well supported

SAFE, SMART, EFFICIENT INFRASTRUCTURE THAT BUILDS BETTER COMMUNITIES. McConnell Dowell is a progressive engineering, construction and maintenance company delivering end-to-end projects for clients in the building, infrastructure and resources sectors through its comprehensive skill set and proven problem solving abilities. Our operational focus is to meet and exceed clients’ requirements through innovation, teamwork and progressive thinking. “We have some of the best and brightest in their fields working for us. It’s something we’re proud of; we strive to be the industry leaders and it shows in our work.” - CEO David Robinson

McConnell Dowell is currently delivering the Lloyd Street Southern Extension Stage One - Rail Corridor Grade Separation contract with Main Roads Western Australia. Located between Great Eastern Highway in Midland and the Great Eastern Highway Bypass in Hazelmere, the project is set to significantly improve traffic flow and safety along Lloyd Street by building an underpass under the railway to replace the existing level crossing. Visit us at - www.mcconnelldowell.com

by both current and new shareholders alike,” adds Procter. “True to this investment philosophy, we did slash our debt and begin the aggressive brownfields exploration program, which is currently ongoing.” 2016 AND BEYOND Millennium expects another year of strong production at very competitive operating costs. It has forecast production of 80,000–85,000 ounces at an AISC of $1,180/ounce‐$1,220/ ounce for 2016. The Company has earmarked a $10 million exploration campaign across the Project area to grow its gold mineral inventory and mine life. This plan equates to over 110,000 metres of RC drilling, operating 3 or 4 rigs at any one time during 2016. “The Company continues to make significant inroads with these ongoing drilling programs which have already delivered early success,” says Millennium. Its focus now is on maintaining the production and cost performance at Nullagine to maximise free cash flow, now that the company no longer has balance sheet debt. Millennium is driving exploration programmes hard to grow the project’s gold inventory and mine life. “Success on this front will further strengthen the market’s confidence in the Company. It will also, essentially, demonstrate that we can sustain our strong cash flows over the longer term,” Procter concludes.